Top of the Pile 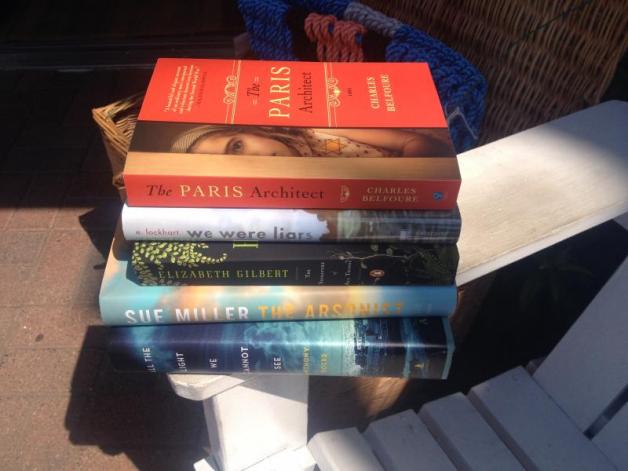 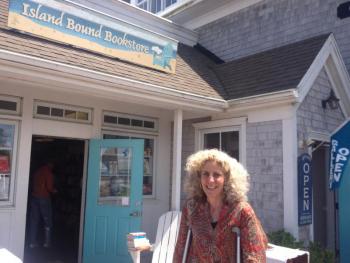 All summer long people come into the store to tell me how good certain books are, to tell me I simply must read this or that. But summer on the island is so (happily!) busy for island shopkeepers that I don’t get around to reading most of these recommended books until winter. Winter on the island, now that’s an entirely different story in terms of free time!

By late summer my fall/winter reading recommendations list is quite long. I thought I’d share with you what’s at the very top. Since these are books customers and friends have suggested (insisted might be a better word!) I read, I’ve turned to Indie Booksellers (www.indiebound.org) for plot summaries — anything in quotes comes from this favorite site of mine.

Kids are reading this book and loving it so much they are telling their parents to read it. This girl-meets-boy story is apparently full of many twists and the last one is so surprising, readers need to talk about it immediately — even if it means talking to their parents! Here’s the teaser from the back of the book:

A beautiful and distinguished family.

A revolution. An accident. A secret.

All the Light We Cannot See

“From the highly acclaimed, multiple award-winning Anthony Doerr, a beautiful, stunningly ambitious instant New York Times bestseller about a blind French girl and a German boy whose paths collide in occupied France as both try to survive the devastation of World War II.

“Deftly interweaving the lives of Marie-Laure and Werner, he illuminates the ways, against all odds, people try to be good to one another. Ten years in the writing, ‘All the Light We Cannot See’ is a magnificent, deeply moving novel from a writer ‘whose sentences never fail to thrill’ (Los Angeles Times).”

“In 1942 Paris, gifted architect Lucien Bernard accepts a commission that will bring him a great deal of money and maybe get him killed. But if he’s clever enough, he’ll avoid any trouble. All he has to do is design a secret hiding place for a wealthy Jewish man, a space so invisible that even the most determined German officer won’t find it. He sorely needs the money, and outwitting the Nazis who have occupied his beloved city is a challenge he can’t resist.

“But when one of his hiding spaces fails horribly, and the problem of where to hide a Jew becomes terribly personal, Lucien can no longer ignore what’s at stake. The Paris Architect asks us to consider what we owe each other, and just how far we’ll go to make things right.”

The Signature of All Things

Well, this one’s in the pile but I can’t swear I’ll get around to reading it. Despite knowing that I did not like either of her last two books “Eat, Pray, Love” and “Committed,” my friends are insisting I read this one. Because it’s a return to fiction, I just might give it a chance. From the Indie Booksellers site:

“Exquisitely researched and told at a galloping pace, ‘The Signature of All Things’ soars across the globe — from London to Peru to Philadelphia to Tahiti to Amsterdam, and beyond. Along the way, the story is peopled with unforgettable characters: missionaries, abolitionists, adventurers, astronomers, sea captains, geniuses, and the quite mad.

“But most memorable of all, it is the story of Alma Whittaker, who — born in the Age of Enlightenment, but living well into the Industrial Revolution — bears witness to that extraordinary moment in human history when all the old assumptions about science, religion, commerce, and class were exploding into dangerous new ideas. Written in the bold, questing spirit of that singular time, Gilbert’s wise, deep, and spellbinding tale is certain to capture the hearts and minds of readers.”

“From the best-selling author of ‘While I Was Gone’ and ‘The Senator’s Wife,’ a superb new novel about a family and a community tested when an arsonist begins setting fire to the homes of the summer people in a small New England town. Troubled by the feeling that she belongs nowhere after working in East Africa for fifteen years, Frankie Rowley has come home — home to the small New Hampshire village of Pomeroy and the farmhouse where her family has always summered. On her first night back, a house up the road burns to the ground. Then another house burns, and another, always the houses of the summer people.

“In a town where people have never bothered to lock their doors, social fault lines are opened, and neighbors begin to regard one another with suspicion. Against this backdrop of menace and fear, Frankie begins a passionate, unexpected affair with the editor of the local paper, a romance that progresses with exquisite tenderness and heat toward its own remarkable risks and revelations.”

From the 2014 Block Island Summer Times