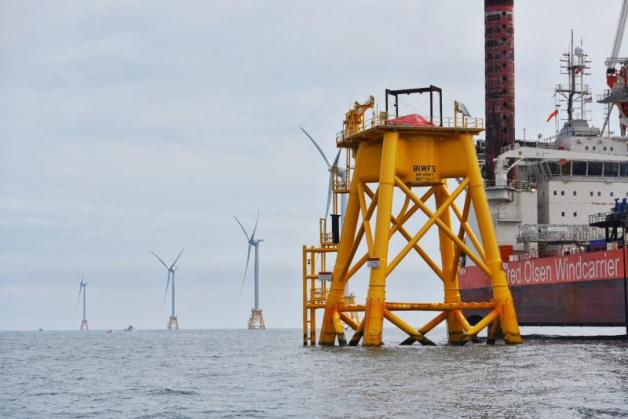 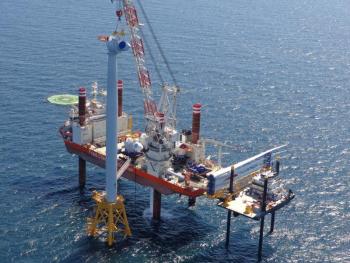 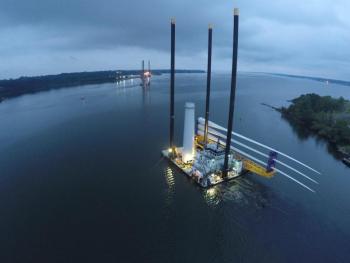 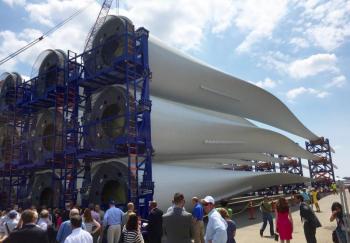 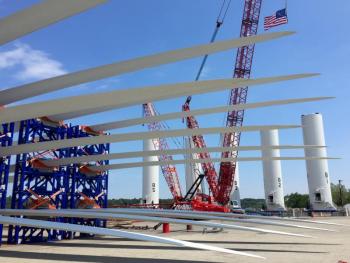 Here are the aggregate components, tools and methods that Deepwater Wind and National Grid have employed during the past year to construct the five turbine, 30-megawatt Block Island Wind Farm:
Unusual, futuristic looking lift-boats LB Caitlin, LB Paul, LB Robert and the Michael and Lacie Eymard employ spider-like legs to rise high above sea level. Swiss Army-type vessels like the cargo ship BBC Ruby; the crew transfer vessel Atlantic Pioneer; the cable-laying-barge CLB Big Max; and the Fred. Olsen Windcarrier’s Brave Tern, perform complex tasks while cruising offshore. On the island, assorted Tonka-toy-type trucks, excavators and cranes, roam the sand, dirt, and pavement, coordinating installation of a complex cable transmission system.
The fabrication of a cleverly designed and engineered technology, welding tons of intricate steel apparatus, strategically placing equipment utilizing GPS coordinates, dredging a six-foot deep trench in the seabed while embedding a cable loaded with fiber optics, drilling through rock and under dirt and sand, installing rocket-like tower sections that extend to the sky, and fastening rivets and bolts and connecting cables.
These are what Project Manager Bryan Wilson frequently called the “toys” of the project.
Think what you will, pro or con, about the wind farm, but you have to marvel at the utilization of ingenuity and imagination to accomplish such a large-scale project. It’s a project that Deepwater Wind CEO Jeff Grybowski has called “big and complicated.”
On Sunday, July 26, 2015, Deepwater Wind officials witnessed a 500-ton capacity crane situated on a floating barge lift a 450-ton, 110-foot tall steel wind farm foundation from its deck and deposit it in 90 feet of unforgiving ocean three miles off the coast of Block Island. The very next day, Gov. Gina Raimondo joined a contingent of state and federal officials in celebrating the “steel in the water” moment by touring the wind farm site aboard a Rhode Island Fast Ferry.
In siting its $290 million pilot project, Deepwater Wind may have carefully chosen a suitable high wind zone for constructing its pilot offshore wind farm, but there were a few bumps along the way as a result. The company discovered the challenges of installing an offshore wind farm in such a harsh environment after some early missteps led to setbacks.
Deepwater Wind Chairman Bryan Martin acknowledged that constructing America’s first offshore wind farm would be a learning process. So, after damaging a foundation at the onset of installation, Deepwater Wind deployed Montco Offshore’s lift-boats to rise above the swells to facilitate construction. Things went smoothly after the LB Robert arrived on the scene and installed the steel foundations in rather expedient fashion.
While installing the $107 million cable transmission system on Block Island, National Grid went through its own learning curve when it unearthed ancient Native American artifacts on Block Island and experienced drilling delays at Scarborough Beach in Narragansett.
The delays caused National Grid to regroup, and after negotiations, get approval from the town of New Shoreham to extend its deadline at the Town Beach until later than was originally planned.
National Grid worked through the winter months, conducting cable installation activities seemingly in isolation, amidst rain or snow, when very few people were watching. Excavators dug holes in the earth. Concrete was poured in the rain. Cable was installed in duct banks while snow and wind whipped all around.
In late spring, after the landscape had thawed, 15 sections of the five, 260-foot tall and 440-ton wind turbine towers were delivered from Spain to Deepwater Wind and General Electric’s temporary dockside assembling facility at the Port of Providence. Shortly thereafter, the 15, 241-foot long, 29-ton, blades for the wind farm followed, arriving from a manufacturing plant in Denmark.
When summer arrived, National Grid greeted CLB Big Max at the Town Beach, where the utility company’s 20-mile long sea2shore submarine cable was brought ashore via a jet-plow, airbags and divers, routed under the dunes, and spliced with the project’s terrestrial cable in a north parking lot manhole. It was a temperate June 23 morning when the sea2shore cable landed and made history by connecting the island to the mainland.
On Sunday, July 31, after traveling 3,300 miles across the Atlantic Ocean from France aboard the Brave Tern, the nacelles, the power generating component that sits atop the towers and hold the blades, docked in Newport Harbor. Two days later, the lift-boats LB Caitlin and LB Paul joined the Brave Tern at the offshore wind farm site and began the process of installing the first wind turbine tower.
Another historic moment was then achieved on Thursday, Aug. 4 at 8:30 a.m., when Deepwater Wind completed installation of the first wind turbine tower. For the first time people could see what the wind turbine towers would look like once fully installed at the wind farm site.
The pilot project had come a long way since Sept. 4, 2014, when the wind farm was granted final approval for construction by the Army Corps of Engineers. At the time, one New Shoreham official remarked, “We’re the smallest community in the smallest state, and we’ll have the first offshore wind farm in the country. A lot of people have put a lot of work into this and I think it’s great. Great for the ratepayers and great for the environment.”
Whether the wind farm will reduce energy bills of Block Island ratepayers is anybody’s guess, but its transformative impact on the island may be evident in its attendant cable transmission system that boasts the potential of stable electric rates and building an island-wide broadband network. The wind farm may be decommissioned in 20 years, with the turbine towers removed from sight, but the cable system will exist for many decades.
In the meantime, the fascination over the Block Island Wind Farm captures our imaginations and leads us to ponder what its technology will deliver in the coming days when the switch has been flipped, and the blades are spinning. In a matter of months, the nation’s first offshore wind farm will be producing electricity, but not before it races deliberately and methodically toward the finish line.