Under a Pink Pearl Moon 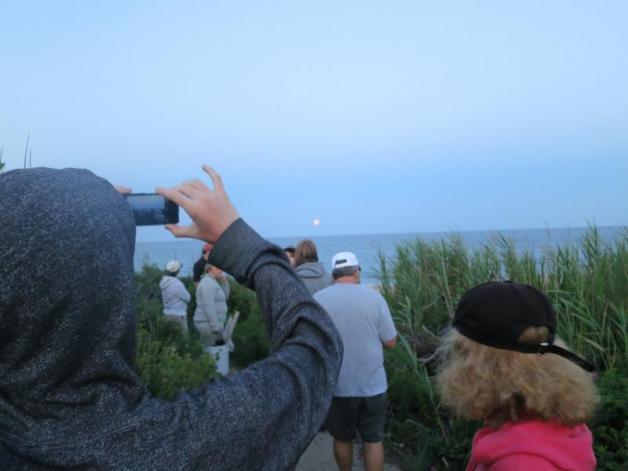 Above: The group reaches the end of the trail and spots the moon. Below: Listening for creatures in the woods are Dorothy Rule, center, OVF intern Meghan Bernier, right, and her mother Joanne, left; the moon and ferry from the beach; the group listens to Gaffett explain the geology, the author’s friend Rosemary is in pink on the far right. Photos by Judy Tierney 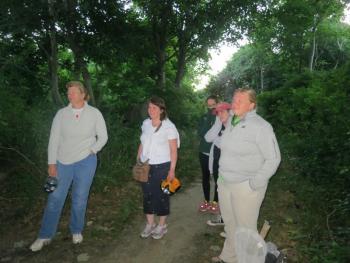 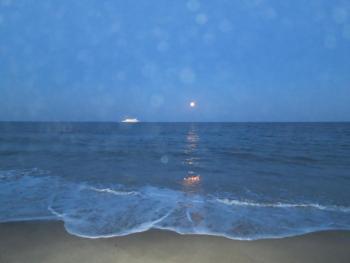 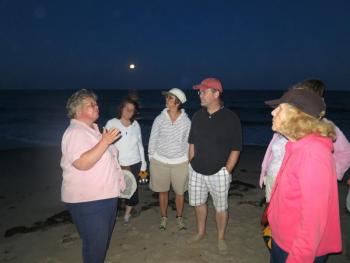 On the island with three friends in the house, I was looking for something interesting to do at night during their visits besides the usual drinks with dinner or a movie, and while I was thinking, I happened to focus on a postcard lying on the dining room table in a large pile of recent mail. Maybe it was the colorful lettering that caught my attention, but I picked it up and noticed in the corner “Sense of Wonder Evening/Twilight Walk” scheduled for that Saturday night by the Ocean View Foundation. I was intrigued, as were my friends, and so on Saturday we cooked in early and got ourselves to the meeting place, the Clay Head Trail parking lot, on time at 8 p.m.

There were six other folks similarly intrigued and we all followed OVF Director Kim Gaffett and her summer intern Meghan Bernier along a trail that led us from twilight in the parking lot to leafy darkness in a swamp. Further along, the trail opened to twilight again on the bluffs, a luminescent pink pearl perigee moon was rising majestically over the ocean. Perigee is the technical term for what we call super moons, at those nearest points of elliptical orbit, which make the moon appear as much as 30 percent brighter and 14 percent larger than usual, according to NASA. We were as close to the moon as we earthlings get, feeling as if we could almost reach out and touch it.

All of us stopped and watched in awe, totally imbued with, well, a sense of wonder. Bringing us back to earth Gaffett told us though the moon may be “salmon colored” she calls it a “bluefish moon” because the fishermen are catching blues at this time. Not surprising that Gaffett, whose love of Block Island and nature shines through during these Foundation events, would frame this perigee moonrise with a local theme.

What the darkness brings

When we first gathered at the head of the trail to start on the walk, Gaffett explained that she had named this activity for Rachel Carson’s posthumously published book “The Sense of Wonder” in which the author urges parents to take their children into the wild to help them develop a love of nature.

On our way along the trail, we will not be able to rely on our sight but will begin to use our other senses, she said. Though we might see swallows overhead going to roost, we would mostly just hear other birds settling down.

As though on cue, a crow caw caws and a towhee calls towHEE, towHEE. Gaffett listens and identifies the towhee. Later, at home, I look it up on the internet and see that the Eastern towhee has markings similar to, but more striking than, the robins we see all the time. The back feathers are a true black on the male and a rich rusty brown on the female but it’s the bright reddish-brown sides on both that are most distinctive. The Cornell Lab of Ornithology describes this bird too plainly as “an oversized sparrow” that lives in undergrowth  “where their rummaging makes far more noise than you would expect for their size.” I’ll look forward to seeing one in the daylight.

As we made our way back down the trail single file Gaffett pointed out that the considerable summer road noise on Corn Neck Road had dropped away. It was quiet. The scent of honeysuckle surrounded us, suddenly we saw a little towhee, and farther down, as we traipsed over the wooden planks in the swamp, we heard a green frog croak. Night had fallen inside the tree boughs, though officially the evening was still in twilight.

Suddenly the trail disappeared and the sound of the ocean broke the silence. We were standing on a slight bluff with the beach and the ocean in front of us. We might, Gaffett said, see baby barn owls flying above us. They are learning to feed in this area and get curious when they hear people, she explained.

Gaffett pointed to black striations in the cliff that appeared after “slumps” occurred and to the remains of a path that collapsed down as well. Little Sachem Pond, once fresh water along the shore, is gone as well. The bluffs, she says, are always changing, losing about two feet a year. Asked whether Hurricane Sandy caused this, she says no, that precipitation that drains down from the adjacent lands has. The black striations in the cliff are petrifying wood, not quite stone yet, more like a peat or charcoal. They are millions of years old, Gaffett says, explaining that the island was formed by two separate glacial formations and the seams date back to one of them.

This beach is named Pots and Kettles after the gnarly black and reddish rocks that crop up here. These arise from seams of iron, also left by the glaciers, which can be found in a number of places on the island. The iron oxidizes to red in the water, Gaffett tells us. A red crust forms around sand or small rocks, sometimes causing the rocks to rattle. In some cases the crust of rust breaks away from a larger rock leaving a cup shape, which Native Americans used to cook in.

As we listened, my friend Rosemary spotted a large bird sitting on a branch up on the bluff. It rose up and spread its wings, flying along cliff’s edge, and Gaffett identified it as an owl.

It seems only fitting that we would stop and soak in this place. And we do, building a bonfire using some of the petrified wood. After a gathering around the campfire for a bit, we headed back along the trail using flashlights for illumination. But other than that thready light at our feet, we were in pitch darkness. Now the frog sounds amplified as though they’d gathered in the swamp for a music fest, the honeysuckle scent seemed stronger and, further down along the meadows fireflies danced in the grass and in the trees beyond. Three separate species of fireflies, Gaffett tells us.

The fireflies made Joanne Bernier think about the luminescent creatures she saw in the water underneath the bridge on Beach Avenue the previous night, so instead of driving home, we drove down there to take a peek. Kim and Joanne were already there, and so were the sea creatures. They bobbed along in the current. Maybe they are squid, Joanne suggests. We watched them float down the current for a while and then returned home, still in a state of wonder.

Later, I posed the question to my Facebook friends from the island, and Corrie Heinz, who worked summers for Fish and Wildlife and lived out in the Beane Point cottage, let me know they are comb jellies. I searched the web for facts on comb jellies and found The Monterey Bay Aquarium website where it states the creatures are also known as gooseberries and are an invertebrate, “beautiful, oval-shaped animals with eight rows of tiny comblike plates that they beat to move themselves through the water. As they swim, the comb rows defract light to produce a shimmering, rainbow effect.”

Peter Voskamp, former editor of The Block Island Times,  posted that kayaking through them at night is magical. Maybe it is, and maybe it is time for me to sign on to one of Heinz’s Pond and Beyond nighttime kayak tours.

I could do with a little bit of magic to add to my sense of wonder.

Find out about OVF walks and other activities at oceanviewfoundation.org.