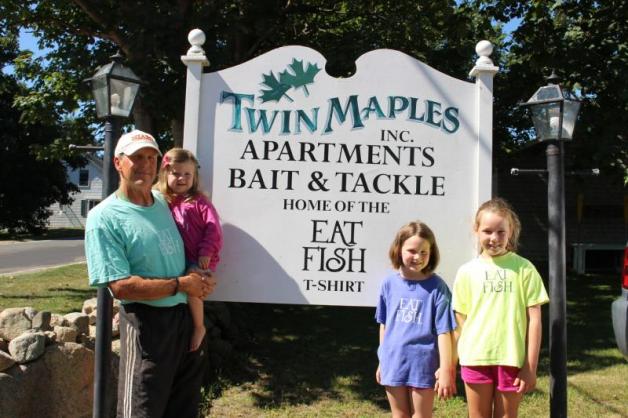 John Swienton and his three grandchildren at the entrance to Twin Maples on Beach Ave.

The first thing you notice is the rotary dial phone on the wall still very much in operation.  Other than new lures and the piles of the popular “Eat Fish” t-shirts, not much has changed in more than six decades. It’s the old Block Island and there is nothing to indicate a looming transformation.
Owner John Swienton has lived his entire life right here. A product of the Block Island schools, he started running the family business at the age of sixteen.
Naturally, he had been working at Twin Maples with his parents all along. Twin Maples is a story of an island family as well as an island business.
It’s actually a story with a twist.
Mathew “Mac” Swienton was a native of Pawtucket who landed on Block Island after service in World War II. Lodging at Cyr’s Sea Breezes, he met Madeline Cyr, daughter of the owner and more than a decade younger, who would be come his wife. They decided to build a life here and welcomed their only child, John in 1949.
Around the same time, they purchased the property that would become Twin Maples – a set of buildings that existed purely because of a bureaucratic mix up.
The four one-hundred-foot-long buildings were built by the US Army after the start of World War II to house two hundred soldiers considered essential for the defense of the United States.
Mac Swienton was told that these barracks were actually supposed to be located on a sprawling army base in Rock Island, Illinois.  As incredible as this may seem, someone misheard Rock Island for Block Island, acquired land immediately adjacent to the US Weather Bureau on the shores of the Great Salt Pond and gave the order to build.
Each barracks building could accommodate fifty soldiers. Four coal stoves per building were to provide heat. (Thirty tons of coal was delivered to the property.)  One of the buildings housed a dining hall and infirmary. The only thing missing were the soldiers who never appeared since there was absolutely no strategic defense justification for their presence.
Mac and Madeline Swienton purchased the property in 1949 and set about renovating them as simple rooms for island vacationers. Twin Maples was born.
Guests paid $45 per week for lodging and two meals per day, served at long tables, family-style. Fifty five to sixty guests gathered precisely at 5 p.m. alerted by a dinner bell.
The menu was Turkey on Sunday, Flounder on Monday, Chicken on Tuesday, Roast Beef on Wednesday, Lamb on Thursday, Swordfish on Friday and Ham on Saturday.  The dining room was empty by seven o’clock, in time for the nightly movie at the theater downtown.
The season began in late June and ended on Labor Day. There was a bait shop and twelve rowboats available for guests and visiting fishermen.
John’s earliest memories are of the buzz of summer activity followed by the long winters. From a young age he was part of the operation, helping in the kitchen, sweeping floors, assisting with repairs and mixing with guests who became lifetime friends. His first job was making breakfast toast at the age of six.
Life on the island was good. In addition to John there were a half-dozen boys and one girl in his class. His teachers included Gertrude Ball (who had taught his father in Pawtucket early in her career), Jessie Ball, and Luella Ball. Bert Ball was the Superintendent.  Fred Benson was an exacting shop teacher giving each student an assignment to build a small home exactly to scale with shingle siding. Elizabeth Dickens and later Merrill Slate taught everyone about birds. It was a good education with a spectacular teacher-to -student ratio.
A cross section of age groups fielded a basketball team beginning in seventh grade. There were trips to the mainland to compete on the court. Team members changed at the school and sprinted across the fields to the tennis court at the Spring House for practice. Those who recall the tennis facility will remember its very uneven macadam surface that must have been a real challenge for dribblers. Some times the team had to shovel snow off the court before practice.
John treasures his home and there was really no chance that he would ever leave. He gradually took over the operation of Twin Maples. His mother Madeline died in 1969 after a long illness and his father, Mac about fifteen years ago.
Over the years, as John just took on more of the responsibilities, he implemented minor changes. There are no more meals served to guests but the cottages are not that different from the nineteen fifties other than some fresh paint and new beds. Families return year after year. Visitors to the bait shop have included actor James Cagney, Radar Reilly of “MASH”, News television broadcaster Brian Williams, Governor John Rowland of Connecticut, and football coach Pete Carrol. All are treated without ceremony and with equal warmth.
Today John and his wife Bonnie, a teacher who retired from the island school with twenty–five years of service, live on the property. There they raised two sons and two daughters who return every summer, three of them with spouses and two with children for a total of three grandchildren.  It is still a family place – a serene location away from the buzz of activity a short distance away downtown or in the busy harbor.
Twin Maples and the people who live there reflect the values and experience that give Block Island its sense of place. As much as things change, there really are some things that stay the same. That’s a comforting thought.