Wading with the Birds at Andy’s Way 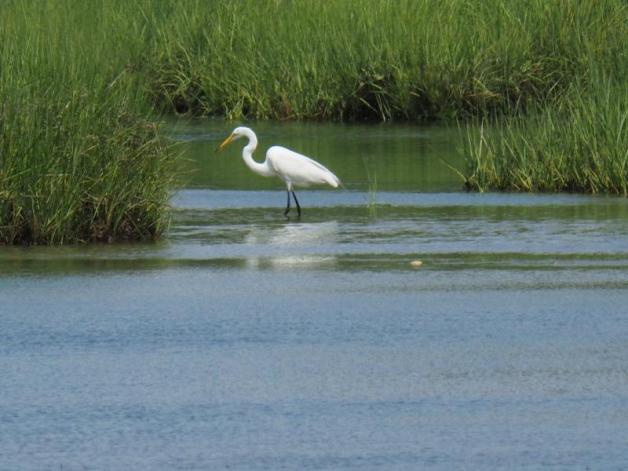 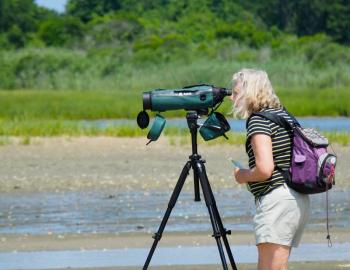 It’s never hard to convince me to go on a bird walk at Andy’s Way with Kim Gaffett, director of the Ocean View Foundation, whether it is a Crazy as a Coot meet-up or another OVF activity, it’s always fun and informative. I’ve done a few and will likely do many more. They are almost always at low tide, and on July 11, the tide ebbed around 11 a.m.  The day was overcast and the birds were not cooperating by flocking to feed in the flats, but we watched and waited for an hour or so and were rewarded with a smattering of birds to watch, including beautiful egrets and night herons.

Gaffett was assisted by Megan Bernier, OVF’s summer eco-worker. I chatted a bit with Bernier, who is in her early twenties and has been summering on the island since she was a girl along with her two triplet sisters and the rest of the family.

She says this is her idea of the perfect job. “What other job allows you to work here during the day exploring nature?” she asked. I could think of none, other than maybe landscaping, but then, that would not bring one to Andy’s Way.

Watching a flock of terns hovering over the sand along the flats, Bernier said, “My mother calls that a prayer meeting.” Amen!

Her mother, Joanne Bernier, was along for the bird walk and told us about a huge horseshoe crab she’d seen on Mosquito Beach, “an old and crusty” one.  Stephanie Baute, who arrived with her long lens camera (see her pictures above and at right), mentioned that she’d found some horseshoe crabs mating over in Cormorant Cove in early June.

This morning, we spot a small brown willet dining on a fiddler crab. The National Audubon Society website (birds.audubon.org) describes this bird as gray-brown with a long straight bill and identifiable in flight “by their flashy black and white wing pattern.”

A great egret was also dining out there in the shallows. As I am a fairly new bird watcher, I asked Gaffett how to tell the difference between that white bird and great herons in their white phase. The egret has a yellow bill and black legs and feet, she told me. Even more detail can be found on The National Wildlife Association website page entitled “Is this a heron, egret or crane: Wildlife Promise” (http://blog.nwf.org/2011/03/is-this-a-heron-egret-or-crane/). They describe the white phase heron’s legs as lighter than those of the great egret.

All this aside, when I examined the bird through Gaffett’s long scope, I forgot to look at the features, and succumbed instead to my joy at taking in this elegant and graceful being standing alone in the shallows. I frequently watch egrets crossing the Great Salt Pond from my front deck. In flight, they remind me of pictures of the famous modern dancer Isadora Duncan draped in long white skirts that swoop around her like wings.

We sighted a yellow crowned night heron, a bird that to me looks to me more like a stocky game bird one would find in a hay field than a graceful heron. It has a yellow triangle on its head, and a plump blue-gray body.

All the talk of horseshoe crabs mating must have affected us because when Bernier spotted some lady slipper shells, she mentioned they are hermaphrodites. They congregate on piles with a female on the bottom topped by a male, and when the female dies the male atop her turns into a female. There could be lots of them upon one another, she told us. I will think of that every time I find one on the beach.

Next month birders, be watching for the great fall migration. Then hopefully we will be seeing many songbirds in flight and gorging on the berries of the Block Island brambles.