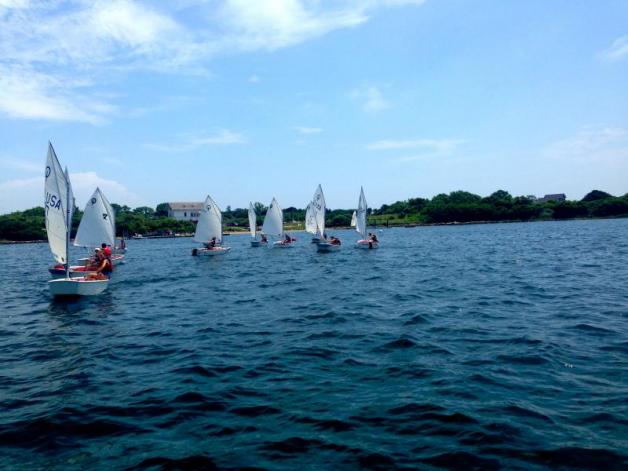 Above: Sailors in the Level II class practice their racing skills in a standard triangle course. Below: Several kids make a human pyramid during one of the Tuesday night barbecues. The barbecues attract kids of all ages, ranging from 4 to 14; Two sailors in the Level I class practice sailing — one steers while the other controls the main sheet. Many kids that have never known each other become friends once they start sailing together; the kids and instructor Shane Baker try to fit as many kids as they can into an Opti sailboat; Club sailors at Andy’s Way exploring sea life (photo by Judy Tierney) Bottom: intern Paige Levinsky and I with three kids from the Club during the annual Fourth of July parade — our theme this year was The Very Hungry Caterpillar; one of the kids and I during the water barbecue, an annual tradition filled with slip n’ slides and water balloons; two girls in the Level I class perform a pirate dance with the rest of their team during our obstacle course on Pirate Day, a themed Fun... 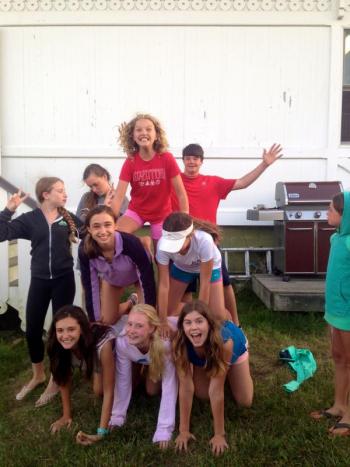 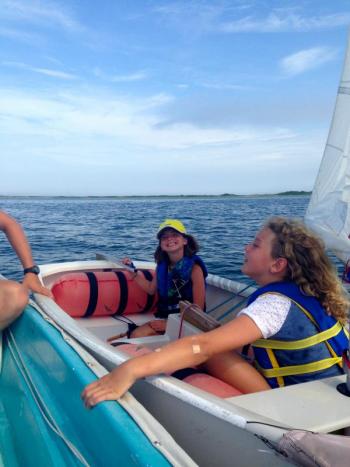 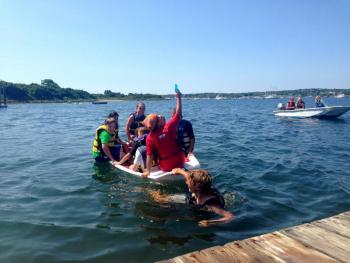 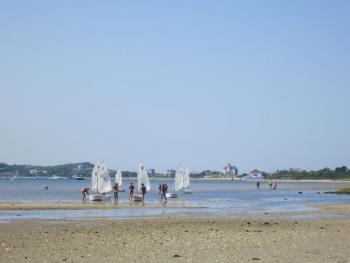 For the past 13 summers on Block Island, the majority of my time here has been spent at my home away from home, the Block Island Club. Located on the northeastern side of the Great Salt Pond, the club was a place for me to further my passion for sailing, expand my (short-lived) interest in tennis, foster friendships and enjoy my summer days. As I aged into a teenager and began to outgrow the sailing, swimming, tennis and arts and crafts classes that had so occupied my summer mornings, I found a new way to participate in the club by working there.

This summer is my third working at the club and although the days can be long, it’s hard to complain about a job on the water at a place where I practically grew up.

Most days begin at 8:30 a.m. as the staff arrives, iced coffees in hand, to open up the clubhouse, prepare for classes, clean the bathrooms and more. This year, we have 12 staff members, along with several younger interns, and a majority of us spent countless summer days as children taking classes on the homey, welcoming property. As the morning chores are finished around 8:50, cars and bikes start rolling in the bumpy dirt driveway off Corn Neck Road to drop off kids for 9 a.m classes.

I work as an assistant sailing instructor and our 9 a.m class is for the beginner kids, who are usually around 8 to 10 years old. This class is our most popular and, as many can imagine, when you put ten pairs of kids in Optimist sailboats (Optis), it’s always an adventure. For this class, we typically set up a standard sailing course with buoys, either in a square or a figure 8 loop for them to round. While sailing may seem like a leisurely sport, for many kids, their first couple days are quite difficult as they struggle to be comfortable on the water and get a grasp for steering, which is made confusing by the fact that you steer in the opposite direction from where you want to go. Thus, a good amount of time is spent comforting scared children and (attempting) to prevent them from crashing.

The class ends at 11 and once all the boats have been docked and de-rigged and we have discussed any problems or improvements with them, we send the kids off to their next classes. There is then a quick turnover to the following class, Level II Racing Opti, which is for the more experienced sailors to practice and learn basic racing skills. This class is usually a bit smaller and attracts kids around the age of 11 or 12. After a tiring two hours in the first class, we’re thankful that these next kids have been sailing for a while as they require much less assistance when rigging and less time is needed to quiet them down and get their attention. We typically set a standard triangle course for them, which consists of a start and finish line, and three buoys that they must round. We have four sailing instructors on staff so two usually act as a committee boat on the start line while the other two are on a chase boat, guiding and instructing the kids as they sail through the course.

We spent a good amount of time this summer preparing the kids in the racing Opti class for an upcoming regatta at Mason’s Island against sailors from the Mason’s Island Yacht Club. We had them practice a lot of starts and use racing tactics such as calling starboard or leeward on another boat, which are rights of way used to prevent crashes when two boats are sailing towards one another. This class ends at 1 p.m. so the kids typically get a good hour and a half on the water to refine their skills. Most of them started out in the Level One class when they first began sailing so it is always rewarding to see them transition from timid and fearful beginners to advanced sailors who are comfortable in a sailboat, no matter the conditions.

On Fridays, we have different “Fun Friday” themes, such as pajama day, or the infamous club tradition of Pirate Day. The kids and instructors both dress up and in the classes we usually play games with the kids, such as tennis ball tag in sailboats, sailing to Andy’s Way for a scavenger hunt or letting them capsize the boats.

After a tiring morning on the water, instructing and organizing high-energy children, we always savor our half hour lunch breaks, especially on Fridays, when parents bring us nice food. But alas, all good things must come to an end as classes continue. The Level I and II classes that were described take place on Monday, Tuesday, Thursday and Friday mornings so on Wednesday mornings, along with Monday and Friday afternoons, we host our Level III, or 420 classes. 420s are larger boats that usually fit around two or three people. This class is filled with teenagers with a mixed level of sailing experience. Some of the participants have sailed at the club for many years, in both Optis and 420s, while others are just new to sailing but too big to join our Opti classes. Since there is such a range in skill level, we try to pair the new sailors with more experienced ones and once the boats are rigged up and sent off, the beginners get a good feel for the sport by watching their partner steer and then trying it themselves. This class has varying lesson plans, some days they will practice racing, others will be spent taking them out the channel to sail in the ocean and on the particularly fun, light-wind days we let them practice capsizing or do “man over” drills, both of which the kids plead for as they involve getting in the water.

That class usually wraps up around 3:30. On some days, I work until 6:00 in the office, which just involves selling people tickets, giving them information about membership and the club and answering the phone. Some nights we also hold barbecues or bonfires for the kids. During the barbecues, we play games, grill them hamburgers and hotdogs and have s’mores. The bonfires are for the teenagers and thus require less entertainment, as they are usually happy to play just one game and then sit around a fire, make hotdogs and s’mores and talk with friends.

Although days at the club may seem like routine, there is always another adventure just around the corner. Whether it’s stormy weather, a fun Friday game day, the club dance or anything else, the kids and other instructors make the job unpredictable and always fun. Of course there are days when I question my decision to spend my summer trying to organize high-energy, crazy children both on land and on the water, but I can’t think of a better way to give back to the place that meant so much to me as a child. There is nothing better than seeing a younger version of myself as a sailor, swimmer, tennis player and artist at the club in the new kids that come to the classes that I now teach. I remember looking up to the instructors as a kid and idolizing their seemingly mature selves. In my mind, that level of authority seemed so desirable and distant, and now look where I am!