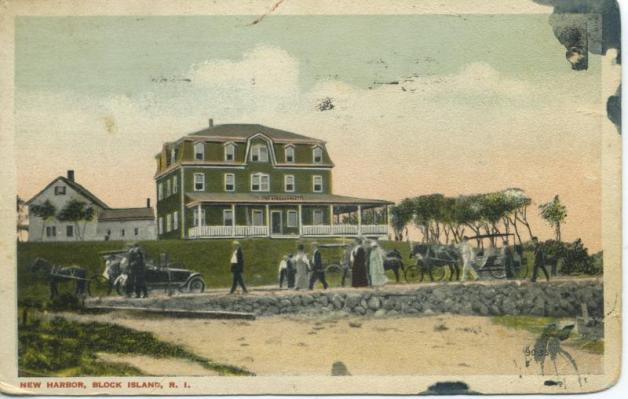 An historic postcard
The Narragansett Inn, built in 1912, is still serving guests in New Harbor.

special events
Antique autos are brought out of garages for special occasions.

history, museum
The Block Island Historical Society boasts a wonderful collection and is housed in a former inn.

Block Island's history is a rich one, encompassing Native American tribes, Revolutionary War heroes, legendary shipwrecks, and its emergence in the late 1800s as one of New England’s premiere summer destinations.

Learn more about the island’s history by visiting the Historical Society Museum and gift shop downtown. A white mansard-roofed building, the Historical houses an extensive collection of furniture, textiles, quilts, oral histories, fishing gear, tools, and Native American artifacts. Then head to Issac’s Corner, at the intersection of Center Road, Lakeside Drive, and Cooneymus roads. Named for the island’s last full-blooded Native American, who died in 1886, it is near the Indian burial ground and the stone monument erected just last year in honor of the Manissean tribe.

On that same corner, overlooking Fresh Pond, sits the gambrel-roofed cottage of composer and poet Arthur Penn, who lived there with his wife Nell in the 1920s. His song “Smilin’ Through” is named for his Block Island home.

No history of Block Island would be complete without mentioning shipwrecks. While some have become the stuff of legend, others remain accessible for sport divers. Among the legendary is the Princess Augusta, which inspired John Greenleaf Whittier’s 1867 poem “The Palatine.”

Block Island’s rough seas and rocky coastlines would certainly have claimed more ships were it not for two lighthouses. The North and Southeast lighthouses have achieved iconic status, revered for their historic significance and as symbols of the community spirit that has allowed them to be restored and preserved.

The Southeast Lighthouse made national headlines in the early nineties when, after years of erosion, it found itself just 50 feet from the cliff’s edge. Islanders banded together to save the beloved structure, raising nearly $2 million in federal and private grants and donations to move the lighthouse 245 feet back from the bluff.

You’ll want to see the North Light, too, by hiking past Settler’s Rock. The lantern on that lighthouse was recently restored and re-lit, and its small museum renovated.