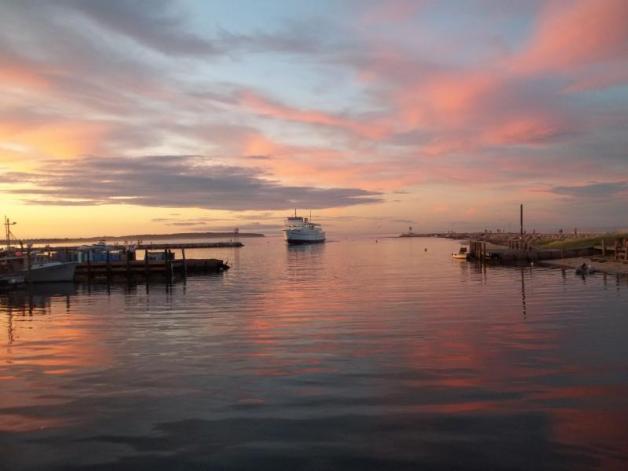 Ferry in or fly in
The sky provides a dramatic backdrop as the ferry arrives in Old Harbor. Flights are available from Westerly.

transportation, ferries
A ferry ride can be a family adventure. Visitors may arrive for a day, a weekend or a season.

Block Island is the Right Place for this Pilot
On the Mainland
On the Island
Beach Reads
Powered by Wind
Turbines and toys
Where is the bathroom?
Barking Block: A Dog’s Guide to the Island

More than 20 million people are within a four-hour drive of the ferries and airlines that bring visitors to Block Island, and 10 million can reach a ferry or airplane in under two hours. Your island vacation is nearer than you think!

By Ferry
Block Island Ferry/Interstate Navigation provides year-round service from Point Judith, Rhode Island (304 Great Island Road, Narragansett, R.I.) to Old Harbor, Block Island. This is the only ferry that can take vehicles to the island, and reservations for them are required (the sooner you can do this the better). Passengers do not need reservations for the roughly one-hour trip. You can find schedules and travel and reservation information for Interstate Navigation at (866) 783-7996 or blockislandferry.com.

Montauk Ferry runs between the tip of Long Island, New York  (462 West Lake Drive, Montauk, N.Y. ), and Block Island during the summer. The trip takes just under two hours. Schedules and information at (631) 668-5700 or vikingfleet.com.

By Private Boat
Dock your own boat at one of four full-service marinas or anchor in either Old Harbor or New Harbor. For more information on marinas, moorings, and anchorage, please visit blockislandinfo.com.

By Commuter Plane
New England Airlines has provided daily scheduled air service to Block Island from Westerly, Rhode Island, since 1970. The airport (56 Airport Road, Westerly, R.I.) is just off Interstate 95 and is an easy drive or train ride from anywhere in New England. (Amtrak serves Westerly with daily trains between Washington/New York and Boston.) Flight time is 12 minutes. For schedules and information call (800) 243-2460. www.block-island.com.

By Private Plane
Block Island State Airport welcomes private prop planes on its one-lane runway. There is no control tower, but pilots should announce themselves on frequency 123.00. For more information check the Airport Facility Directory for the Northeast or call airport manager Landmark Aviation at (401) 466-5511.