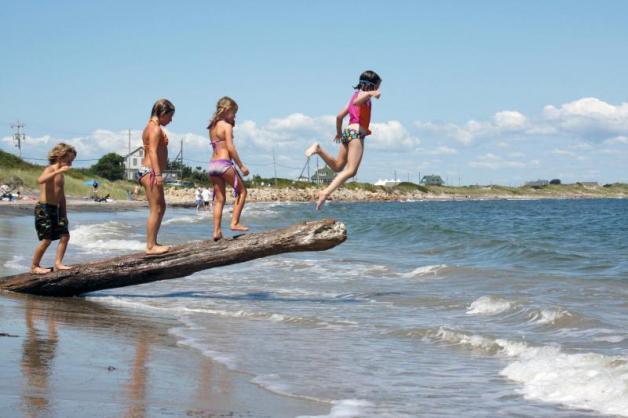 Turquoise and tempting
You will not find better beaches anywhere than on Block Island. From pristine stretches of sand to hidden coves, there is something for everyone.

Ballard's beach, beach
This beach at Ballard's Inn in the heart of town is steps from the ferry. It offers beach games and food and drink brought right to your beach chair. Photo by Kari Curtis

beaches, coves
Even in the heat of an August afternoon, you can walk down a path and discover a cove with a deserted beach to enjoy in solitary splendor.

beach, family fun
The best swimming beach is on the east side of the island, stretching for several miles. Photo by Kari Curtis

Pavilion renovations complete
Beach Reads
Surfing is an obsession
A Week in the Life of an Instructor at the Block...
Michael Oppenheimer: Relaxing on Island,...

Block Island boasts some of the best beaches in the country — on either coast. With 17 miles of unspoiled shoreline, all with our own unique, genuine, laid-back aura. Whether you’re in search of soft sand, clear blue water, or rocky shores to explore, you’ll find all of it along Block Island’s coasts.

Ranked among Coastal Living’s “21 Best Beach Vacations in the United States,” Fred Benson Town Beach provides a sandy shoreline and beach amenities. With the only beach pavilion on the island, it’s the perfect place to grab lunch from their concession stand, with a menu provided by Rebecca’s on the Beach. If you’re in need of beach chairs, umbrellas, or boogie boards, rentals are available. It is also our only beach with lifeguard patrol and bathroom facilities.

If you’re looking for a quieter atmosphere, just north of Fred Benson you’ll find Scotch Beach. With generally fewer people than Fred Benson, its shoreline is perfect for skim boarding or body surfing, and you’ll also find a volleyball net that’s set up for your convenience.

Even further north of Scotch is Mansion Beach. One of the most popular beaches on the island, it boasts clear waters, soft sand and is a favorite of island visitors. With waves slightly bigger than along the beaches just south, Mansion is ideal for boogie boarding and body surfing. On calm days provides a perfect setting for skim boarding. However, being the farthest from town, you might want to take a bike or car.

Beaches on the western coast of the island grace you with some of the most breathtaking sunsets you’ll ever see, and their rocky shores make for perfect outdoors adventures for kids. Gracie’s and Dorie’s Coves both can be found down winding dirt roads, offering unobstructed views to the ocean and stony beaches to explore. They’re also perfect for roasting marshmallows over a beach fire as you watch the sunset. (Know that all beach fires require a fire permit from the Police Station.)

To the north, along the inlet to the Great Salt Pond, is secluded Coast Guard Beach. A mile down the winding dirt road you’ll find the small beach, tucked behind a wooded trail that opens up to the channel. Although swimming is not permitted, Coast Guard is known for its fishing, and is also where you can watch the boats come in and out of the harbor or watch the sunset.

Regardless of what beaches you choose to spend your time at, Block Island has long been renowned for its pristine shorelines. It is an element of the island that we are proud of, and ask that you care for them the way we do!