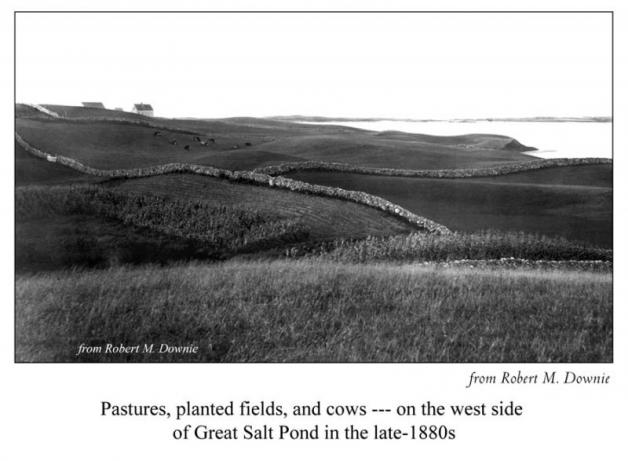 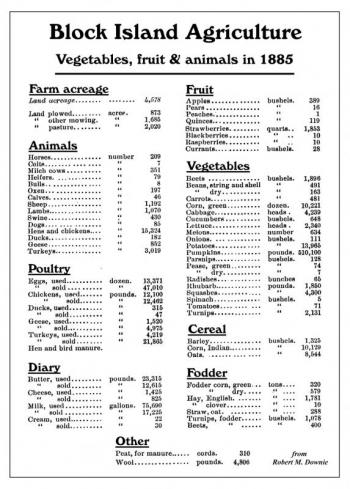 While writers in big cities in the 1800s wrote wistfully of their imagined utopias, Block Islanders were living in one. Some of the 1,500 men, women and children here sustained themselves from the sea, some from the land, and many from both.

The island’s farming statistics in 1885 listed 19 kinds of vegetables, mostly grown to export, or for consumption at Old Harbor’s blossoming summer hotels and restaurants. “Pease” were spelled oddly back then, but who’s going to argue with a community that grew 74 bushels of them — along with 1,896 bushels of beets; 10,100 pounds of pumpkins; 4,239 heads of cabbage; and countless other things. It was plain though, that with a paltry crop of five bushels, spinach wasn’t the most popular veggie then, either.

Consider corn, however. The 1885 ledgers tell us that 10,221 dozen ears of “green corn” were grown to eat as vegetables (that’s 122,652 separate ears), while another 10,129 bushels of Indian corn was grown for use as cereal (probably about one million ears!), and another 899 tons of corn was harvested for animal fodder (a staggering number of individual cobs, better left to the imagination than to my math).

While the list of fruit grown here in 1885 is not impressive — apples, pears, peaches, quinces, strawberries, blackberries, raspberries, and currants — one statistic presages a potent change. No, it is not the fact that only a single bushel of peaches was grown here in 1885, in what must have been an experimental effort, dutifully listed. Nor is it the remarkable number of 4,578 cultivated acres in 1885, from a total of about 5,000 acres of land and beaches on the whole island. The most compelling data is instead found in the number of blackberries harvested in 1885 — only 10 quarts — an amount now easily gathered in anyone’s overgrown backyard.