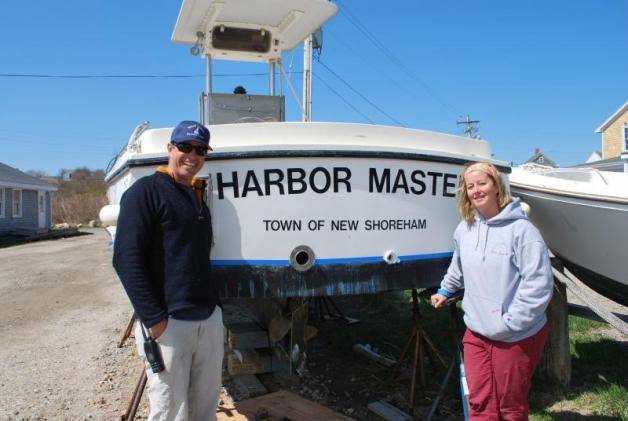 Steve Land and Kate McConville spent a lot of time this spring readying the Harbormaster “fleet” for the season.

In a dirt parking lot near Dead Eye Dick’s, harbormaster Steve Land and assistant harbormaster Kate McConville are elbow deep in bottom paint, motor oil and dead impellers. It has been a long winter, but finally warmer spring breezes hint at what’s to come. It’s time to ready boats for the water, the first step in commissioning the Great Salt Pond for the summer.

Block Island’s Great Salt Pond, a main recreational hub for vacation water activity can be one busy place. There are three marinas, 90 rental town moorings and then there are all those private ones. Boats come and go beginning in the wee hours of the morning until late into the night. Boats that arrive too late to grab a rental mooring seek a stable anchorage site.

There are also people shellfishing, kite surfing, swimming, kayaking and paddleboarding. Overseeing it all is the harbormaster and crew, a dedicated staff that does its best to keep chaos at bay. And not just on the water. Bethanie Rousseau, administrative assistant, is in the office overseeing all things official throughout the year.

Steve Land has been Block Island’s harbormaster for more than three years. He was assistant harbormaster for two years prior to that. In that time, he hasn’t lost his enthusiasm for the job. Case in point: On this day, Sunday, he is aboard the harbormaster’s vessel, which is in dry dock being prepped for summer duty. It is one of six he and McConville will go over minutely before being launched in the next few weeks. Besides this boat, there is the official-looking marine patrol, and then there are the all-important pump-outs, four to be exact, one brand new.

There is an obstinate broken impeller on the harbormaster’s vessel. Land twists and pulls and finally gets it out. He holds it up, gripped in the heavy-duty pliers, as if it were a pulled tooth and shows a bent blade, the cause of the malfunction. When he’s done with this job, there are a bunch of zincs and filters that need changing. By late afternoon he hopes to crank up the Yanmar engine and make sure it turns over — on land first. The old engine is a good one but it has many hours of on the water duty ahead. He hopes next year the budget will supply a new one.

Land and McConville are not complaining, even though the bottom paint is black and the wind is blowing enough to send it in the wrong direction if they are not careful. It is a sunny morning and they are here doing one of their favorite things, attending to boats. The weird hours they keep are part of the job. Both are pleased to be working in the fresh air. Winter duties, at least for Land, are the antithesis of this. From October through March he attends lots of meetings, repairs town mooring balls and acts as the winter shellfish warden. It is also the time when he interviews and hires the summer staff.

The two flagships are heavy. One weighs 12,000 pounds and the other 6,000 pounds. They are fast, but cumbersome when compared to his boat, an elegant 40-plus foot Swan bluewater cruiser at anchor in the middle of the pond. Each year he sails it here from the Caribbean and then takes it back in the fall.

Married and the father of two young children, Land is an avid sailor, a skill he plans to teach his kids once they are old enough to hold a main sheet. For the time being he does his blue water journeys solo. Harbormaster McConville, on the other hand, prefers powerboats. A sailing life is not for her.

Though the ice is gone just a month or so, the harbor has seen early visitors. There was a 40-foot Valiant from Greenport and another yacht from Bristol, Rhode Island on shakedown cruises.

“Block Island is an awesome place to come,” Land says. “It is the first place [boaters] want to come if they live in southern New England, but not everyone has the experience [to handle our crowded harbor].”

Which begs the question, how easy is it to spot those novice boaters? Land and McConville say sometimes the marine radio gives them away.

“Someone will ask, ‘Where do I park?’” says McConville with a friendly laugh.

The Business of Enforcement

“This is everyone’s pond, not just ours,” Land notes, and McConville adds that as harbormasters, they are not out to “spoil your vacation.” The harbormasters do however have to enforce certain regulations that keep the water safe for all.

There are the obvious violations they have to deal with, such as speeding, anchoring in the mooring fields, or shellfishing or fin fishing without a license. Then there are the heavier crimes: operating a boat to endanger or annoy; leaving a vessel abandoned; sewage discharge. As for the last, Land has never had to seal a vessel’s tank outflow. And, anyway, he said newer boat designs make it difficult to discharge illegally into the water.

A good portion of the harbormaster’s summer staff works the pump-out boats. Believe it or not, it is one of the more coveted jobs on the pond and there is always a long list of applicants.

Land passes on applicants with no boating experience, because the training to do the actual pump-out is time consuming. He wants people who are already comfortable handling a vessel. Each year he takes the pump-out rookies around to about 30 boats until they can do the job alone.

Regarding pump-out, yes, disasters happen. Handling the hoses and valves is tricky, and more than one employee has gotten a rude awakening by not being careful. There is also the courtesy factor. Both Land and McConville stress the importance of courtesy on the job.

The summer season enforcement division is separate from the pump-out staff. Land said both he and McConville and their enforcement team will be on the water later hours this year. Many boaters do not know that there is a noise ordinance on the pond. At 10 p.m. the noise is supposed to stop, and that includes running an engine to heat up some water or charge the lights.

Block Island’s harbormasters always travel in pairs on their boats. This came in handy last summer during a freak storm when McConville and Land had to rescue two vessels that broke free of anchorages. They had just tied a line to one and were towing it to a mooring when they spotted a sailboat dancing free. They quickly tied a line to that one as well and pulled both boats behind the harbormasters vessel out of danger.

There are also the emergencies. A boat caught fire last year. Another boat, leaving the harbor entrance, encountered a rogue wave and swamped. There are also people who become ill, and need a medevac. With that in mind several members of the staff are CPR-certified and some are on the island Rescue Squad.

Then there are the odd piracy issues — pirate moorings for instance. Last year there were a couple that mysteriously appeared at the back of the mooring field. Some, it seems, in their long quest for a coveted Block Island mooring, simply take matters into their own hands and drop their own. These pirate moorings can cost a few thousand dollars, given the chain and mushroom that hold the mooring ball to the pond’s floor. The illegal moorings were pulled.

And there is the weather. Block Island’s weather, even in summer, is unpredictable. Last year there were stronger than normal southwesterly breezes in the afternoon. There were plenty of thunderstorms with impressive lightning, and even a tornado. Through it all, the harbormasters are on duty. On those unbelievably crowded weekends on the pond when there seem to be more boats than water, such as the Fourth of July, the enforcement staff is in perpetual motion. Land said the island police monitor the marine radio as well and will help when necessary.

Those hectic days, however, are still a few weeks off. There are some sailing regattas in between, in June. Out here right now, there is just a nice spring breeze and a couple of boats to paint. A reprieve before the storm. The Great Salt Pond behind where the harbormasters work is a deep blue and tranquil.

Hard to believe the change that will occur when June phases out into July, and the summer crowds truly arrive.