No Crosswind too Strong

Block Island is the Right Place for this Pilot 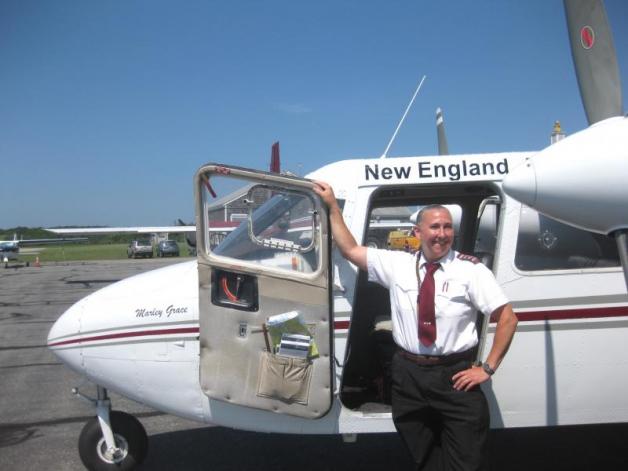 At age 7, Lynn Thoma knew she wanted to fly. She was hooked after her first flight, determined to learn how to handle a plane herself. And she did. Today, Thoma is a pilot for New England Airlines, helping to connect Block Island to the mainland via air travel.

She doesn’t mind the famously challenging and sometimes treacherous weather conditions that characterize the approximately 12-minute journey between Block Island and Westerly airports. In fact, Thoma enjoys a challenge.

“The windier it is, the more I like it,” she says with a smile, though she admits “it’s not always the nicest for the passengers.” It’s a test of her abilities, her control and finesse as a pilot, to “touch down softly when the wind is blowing more than 30 knots.” She’s not intimidated by what she refers to as the “three letter f-word” either—fog is simply another challenge that she faces without hesitation.

Thoma’s eagerness to tackle difficult flight conditions is consistent with her character. She’s focused — and has been since that first flight at age 7. On that day, her mother took the family to the local airport to see a free radio-controlled model-airplane show. The weather, as Thoma recalls, was lousy, but a pilot was taking people up for short flights.

“There were six of us and the pilot said, ‘We’ll have to do two flights.’” But her mother insisted that they all go together. So they did, Thoma squeezed beside her sister, strapped into the same seatbelt. As they flew, Thoma tugged at the belt and stood up — she was too short to see out the window while seated. Her mother quickly put a stop to this behavior, but Thoma didn’t mind; she gave herself up to the motion, thinking, “Well, if I can’t see flying, I can feel flying.” The bumps of turbulence felt so different from being in a car. “I loved it, loved it, loved it,” she declares, but her family couldn’t afford for her to fly regularly.

Thoma wasn’t deterred. For her 15th birthday, she begged for a flight lesson: “I don’t have to have a cake… I just want to have a flight lesson,” she remembers saying. But it didn’t happen. That night, over a chess game with her father, Thoma wistfully mentioned the flight lesson again. “I like my other gifts,” she told her dad, “but maybe I could have that flying lesson for Christmas?”

Her father hadn’t realized how serious she was about flying. It turned out that a friend had offered to take him up for a flight, so he brought Thoma. After that, she struck a deal with her father’s friend, giving all her babysitting money to help rent a plane so they could fly. Sometimes he’d let her hold the controls.

She couldn’t pay for a car and flight lessons, so she chose flight lessons, solo-ing an airplane before she could drive a car alone. Since she paid for the lessons for herself, there would often be a two- or three-week gap between them, making it difficult to remember all of the maneuvers she’d learned during the previous session.

It took two years to get her license, learning how to navigate, how to land, and how to communicate via radio, as well as perform a variety of different maneuvers. At age 18, Thoma could pilot a plane — but in fair weather and not for hire. She kept working and kept flying. She worked at the flight school in Groton, Conn., in return for flying lessons, once volunteering to paint and scrape a three-story building by herself. Ten years after her first lesson, Thoma had secured her full license and began working as a flight instructor.

Today, as a pilot for New England Airlines, Thoma flies back and forth from Block Island to Westerly, sometimes making as many as eight round-trip flights on a busy day. Sometimes she is asked to charter a flight, for example, picking up passengers in New Jersey and taking them to the island.

When flying a twin-engine plane, she can take up to nine passengers, not counting children under 2. Occasionally a high school will contact the airline service and Thoma will take students up in groups of two to three. It doesn’t happen frequently, she says, but “I’m always happy to do it!”

It is clear that she enjoys sharing her longtime passion for aviation with others. “I love the physical sensation of flying, the constantly changing view—the island, the way the light hits it, the way the clouds are,” she says. All that and the opportunity to test herself against the elements, soaring fearlessly through the wind and fog, is what keeps Thoma in the air.