A sense of wonder in the digital age 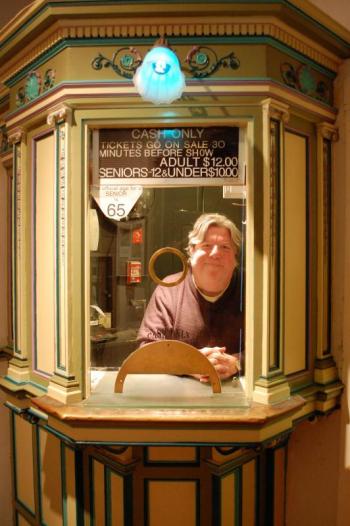 The author, who this year is one of the people taking tickets and pushing the button on the new digital projector. All photos by Kari Curtis

There is a timeless feeling when you walk into the Empire Theatre on Block Island. It isn’t just the vintage décor — the old wood floor, the high-beamed ceiling, or the classic sign that hangs over the back of the hall. The one that advertises roller skating for 30 cents.

The Empire is one of the last movie theaters where the actual watching of the movie is the primary experience. The lobby isn’t stuffed with attractions that try to occupy every second of your time before you sit for the previews. There are no video games or restaurants and the concession stand is a small, low-tech affair: a glass booth filled with a selection of candy and a popcorn maker that sends the aroma of freshly popped kernals out into the street. More than one person has walked into the theatre just to enjoy the scent — a scent that brings everyone back to an early memory of going to the movies.

That was the difference between then and now. Anyone over a certain age — my age, 54 — remembers the first time they went to the movies and that is all we remember from that: the movie itself. There were no other distractions. The Empire Theatre still offers an experience close to that, and that alone makes the theatre unique.

Now the Empire Theatre, out of necessity, has entered the digital age, which has made a dramatic difference in what happens backstage.

Movies are no longer shipped in “cans” — circular tins filled with a long ribbon of celluloid. That celluloid had to be threaded through a projector — everything had to be lined up just right so that the sound and the image were synched — and then the projectionists would spend the next two hours praying that they wouldn’t find a pile of snaking film coiling out on the floor because something had gone wrong.

That’s all gone. It was announced last year that all movies were going digital. Now they are shipped in heavy cases, not much bigger than an oversized lunchbox, and inside the lunchbox is a harddrive. That harddrive is inserted into the projector and “ingested” — that’s the term — and then queued up, along with a trailer or two, for the next showing. (The new digital projector was purchased through a successful Kickstarter campaign last year. Theatre owner Gary Pollard had set a goal of $55,000 and he raised slightly more than that.)

A movie projectionist was once an artist — it was even a career in the mid-20th century because anyone who could start the next reel without a break and keep the film flowing through the sockets kept their patrons (and the owners) happy. Now you push a button or two.

What is undeniable is that when the lights go down, the image at the Empire is undoubtedly clearer and the sound is crisper. The tension of leaving the projection booth for a moment or two is replaced by some sense of security that the film will play all the way through. Moviegoers are happy because the film is shown uninterrupted from beginning to end.

But that is all in the background. It doesn’t take away from the fact that on any given night, when the Empire is open, the old wooden doors will spring open, someone will be sitting behind that old ticket-taker’s booth (it looks like the person sitting there will tell your fortune), and, sometime before the movie is to begin, the smell of popcorn will fill the air and the crowd will gather out on the street and wonder, just as moviegoers have for generations, what kind of places the movie they are about to see will take them to.