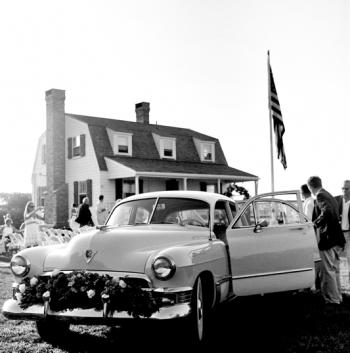 Top: A snapshot from daughter Jessica’s wedding on the grounds.The Captain Faile house not far from the Southeast Lighthouse was built by a sea captain, who also built some of the furniture you can see in the living room inset top right. The house has panoramic ocean views from inside and from the porch, partially shaded and partially open. A rocky path leads to the beach.

The Captain Faile House sits on the ocean side of Spring Street north of the Southeast Lighthouse. The Cushman family loves this house which was built in 1925, but it is not their first residence on the island.

The family history here goes back to World War II when grandfather Bert first learned about Block Island while serving as first mate on a Navy Patrol Destroyer Escort that travelled the Atlantic route. After the war, he returned to the island and purchased acreage around Fresh Pond. Over the years, there were three pieces of land and three homes built including the “Hex House,” the first geodesic dome house built here by family member Bob Stratton, who was a builder of homes in Vermont. Bob brought “a bunch of hippies from Vermont” to build the hex and another domed house. The  three Cushman siblings remember it as an idyllic time, summering in the dome houses with their grandparents across the way.

The siblings are the adult children of Lee Cushman: Jessica Cushman, Bradford “Brad” Cushman and Robert “Bert”  Cushman, each of whom has three children of their own now. Mom Lee was the first Cushman to own the Captain Faile house, so called, says Jessica, because it was built by a sea captain, who also built solid Craftsman-style furniture, some of which is still in the house. “We always laughed about his name,” says Jessica. “Who wants to get on a boat with someone named Captain Faile? Maybe that’s why he started building furniture!”

The three kids all talk about their adventurous summers on the island with great fondness, one memory leading to the next. Jessica reminisces about Robert’s wedding to Cindy Hoyle at the Harbor Baptist Church in 1990. They had rented a tent for the reception when a hurricane struck.Fierce winds, clocked at 80 mph, ripped the tent stakes from the ground.

After the tent failed, the Cushman family searched islandwide for a suitable building, but the wedding day was also Columbus Day, when most businesses on the island were closed or closing. They prevailed on the Atlantic Inn to stay open one more day even as workers were closing the doors and stacking the furniture for winter. The owner relented. The wedding and reception took place. Robert tells the tale of the drama of the hurricane and how, after it passed there was a beautiful quality to the light, a rainbow, and how later,  as the newlyweds and their guests walked on the beach sand their steps caused a phosphorescent trail in the sand he’s never seen before or since. Such is the magic of Block Island for the Cushmans.

Fortunately by the time Jessica got married, mom had bought the Captain Faile house, so she and husband Paul Schulz were married there. “It was a beautiful day on that huge lawn with that incredible view,” says Jessica, recalling driving to the reception and having everyone on the Surf Hotel and the Yellow Kittens decks stand up and cheer as they went past. “I’ll never forget it,” she says.

One of the things that made it a great place to have her wedding, says Jessica, was “all the little bedrooms, everyone stayed there with their kids all running around.” The house has four bedrooms and two baths and lots of nooks and crannies. It’s location about 40 feet above sea level gives all the rooms spectacular views. A rocky path leading to the beach makes it a good spot for surfers. On a clear day you can see from Old Harbor to the Newport Bridge. Bert says that he especially loves the sound of the crashing waves and the clarity of the starry nights. They are things he misses when he’s at his home in suburban New York.

This summer the extended family got together on Block Island in a rental property on the Neck because, sadly, the  Captain’s House is now too small. Now three families of five each, they have outgrown this summer home of their youth. and they choose to stay under one roof for the family meals, the fun, the camaraderie, the conversation and the games. Some evenings while the daylight lasts, they like a game of volleyball after dinner. This island means so much to them. They’ve been coming here since they were toddlers. Jessica sums up, “To us this island is casual, funky, fun and silly. We hope our children have this take-away, too. Here they can be kids, even mess up a bit and enjoy without the pressures that their future and life on the mainland can bring.” She says she’s sad about selling the house, musing, “Maybe we can rent it from the new owners.”

From the September issue of the Block Island Summer Times