In Vogue at North Light Fibers 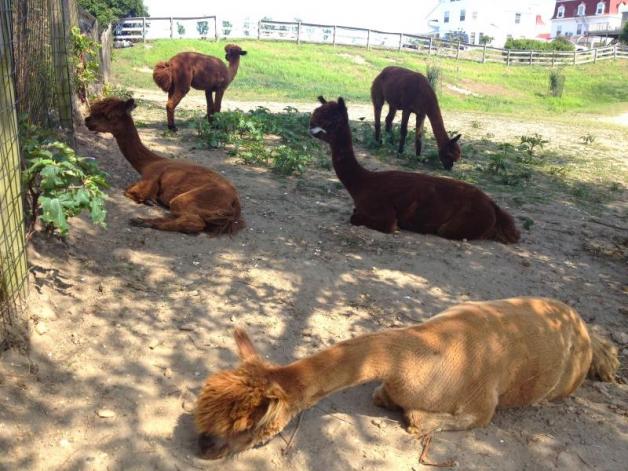 Above: On the way to North Light Fibers you walk past Abrams Animal Farm with barnyard and exotic animals including a zedonk (zebra-donkey), through a gate to a path that takes you through a herd of alpaca you can feed and pet. Below: North Light Fibers has a mini mill upstairs where fiber is turned into yarn; downstairs, the store sells yarn as well as items handmade from it; participants in one of last year’s knitting retreats enjoy a cozy corner table in the Manisses dining room; Sven Risom gives visitors a tour of the mill. Photos by Isabella DeLeo and Kari Curtis 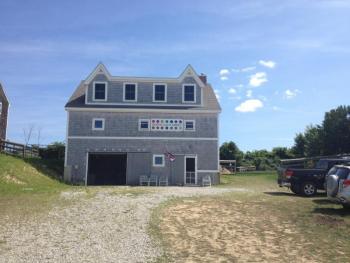 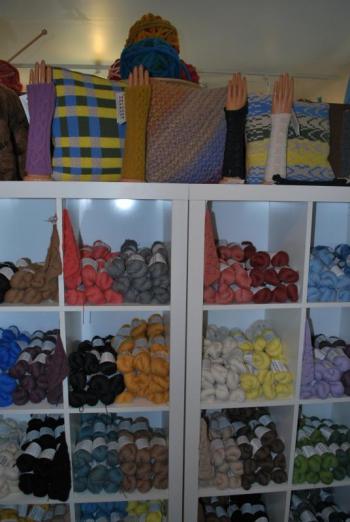 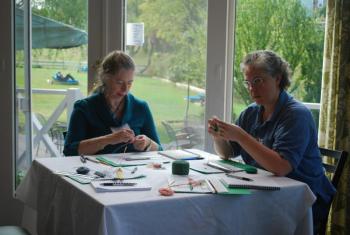 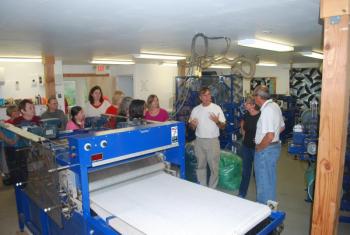 The path to the North Light Fibers mill, store and farm is marked by the sight of exotic animals from Abrams Animal Farm in the periphery: the cool stare of the caged lemur, a llama eating kibble from a child’s hand, even kangaroos and a giant tortoise stand by. Walk past these animals and through the green North Light Fibers gate and a path actually brings you through a herd of alpacas.

Admittedly, it is a funny site: these friendly creatures are shaved – except for the soft, abundant tufts of wool on their heads – since North Light Fibers uses their wool to create some of their homemade yarn.

The North Light Fibers team shears the alpaca wool and then preps the fiber in the upstairs mill for consumer use. Using a host of large, stately machines, the team opens and washes the lanolin out of the fiber. Machines separate the fiber’s hairs. The fibers are stretched out and spun into thread, twisted into yarn. Some of it is steamed and dyed as well, and some is sent to knitters and weavers to create the handmade items sold here.

I conjure images of Slater Mill and textbook old New England. But when I walk downstairs to the store, I am taken out of my reverie. I am surrounded by an extensive collection of divinely soft shawls, gorgeously patterned rugs, and cheerfully colored yarn – punctuated by the occasional friendly yellow Labrador retriever resting on the floor.

According to northlightfibers.com, the company’s mission is twofold: “to produce and market the highest quality exotic yarns, garments, crafts and home décor items, North Light Fibers is Block Island made: hand knit, hand woven, hand made. Additionally, our mission is to create a viable and growing year round manufacturing business on Block Island.”

This year, North Light Fibers could rightfully add “host to prestigious knitting convention” to their arsenal.

Each year, Vogue Knitting sponsors various Live Destination Experiences for knitters throughout the country in select locations such as New York City, scenic Oregon and Camden, Maine. For the first time, from September 18to 21, Block Island will be among those destinations, because of North Light Fibers.

Many knitting conventions in the United States take place in large, impersonal cinderblock-halls; where a knitter is one among hundreds of anonymous individuals. But according to North Light Fibers’ co-founder Sven Risom, the sponsors of the Vogue Knitting Live Destination Experience strive to create a comfortable atmosphere conducive to creativity, forming friendships and establishing a connection to place.

As the knitters arrive in Old Harbor, they become a part of a small community of 25 to 30 participants plus program staff and there are no unfriendly cement halls in sight. Participants stay at a number of island hotels, including the Spring House, the Atlantic Inn, the Manisses, and the 1666. They’ll use the dining rooms of these Victorian-era hotels for some of their knitting classes.

Another class takes place among the art of the Spring Street Gallery to inspire creative use of color in knitting. In the future, Risom hopes to incorporate even more island businesses into the retreat, perhaps allowing knitters to combine knitting with sailing, yoga or creative writing.

During the weekend, knitters take a North Light Fibers mill tour to learn the intricacies of fiber making. Other activities include bird banding with Ocean View Foundation Director Kim Gaffett, a nature walk, a behind the scenes tour of Abrams Animal Farm and – of course – downtime for shopping.

Risom anticipates that the prestige of Vogue Knitting combined with the personable nature of North Light Fibers and its partner institutions will yield an especially strong retreat. Past Vogue knitting retreats have received rave reviews. Risom notes that teachers seem to always return to these retreats and knitters appreciate the caliber of those teachers.

Knitters also look forward to a bonding experience with one another. As an example, Risom says that the camaraderie developed at one recent North Light Fibers retreat was so strong, it prompted the brother of a participant who passed away shortly afterward to write to Risom, expressing his sister’s gratitude for the event and the people she met there.

The retreat brings all kinds of people, including many who hail from different parts of the country,  to the island. Knitters engage with local businesses and often express interest in returning. If the retreat runs smoothly, Vogue will perhaps inspire a constant stream of visitors to the island each year.

North Light Fibers was founded only four years ago, but in those short years it has garnered enough attention to host this nationally recognized retreat with one of the country’s leading knitting magazines.

Risom is proud of North Light Fibers’ successes. But he is also happy to provide a group of knitters the opportunity to talk and thread their life stories together, relaxing in a beautiful dining room or art gallery, with wool in hand and heart on sleeve.

North Light Fibers is located at 10 Spring Street. For more information on the mill or on the retreat, visit their website, northlightfibers.com, or call them at (401) 466-2050. You also can send an email to sven@northlightfibers.com.