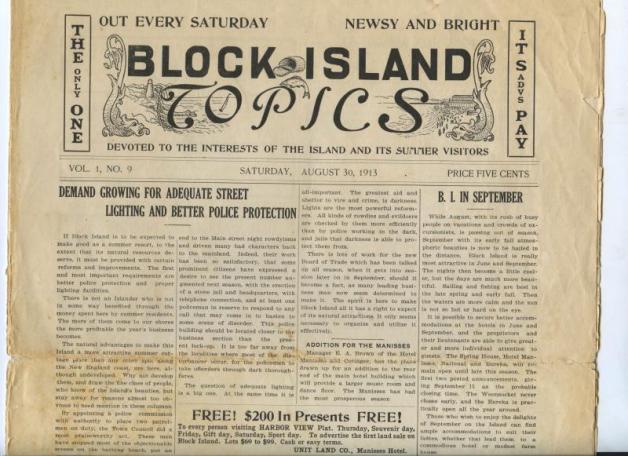 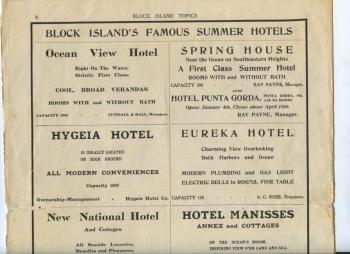 If Block Island is to be expected to make good as a summer resort, to the extent that its natural resources deserve, it must be provided with certain reforms and improvements. The first and most important requirements are better police protection and proper lighting facilities.

There is not an islander who is not in some way benefited through the money spent here by summer residents. The more of them that come to our shores the more profitable the year's business becomes.

The natural advantages to make this Island a more attractive summer cottage place than any other spot along the New England coast, are here, although undeveloped. Why not develop them, and draw the fine class of people, who know of the Island's beauties, but stay away for reasons almost too obvious to need mention in these columns.

By appointing a police commission with authority to place two patrolmen on duty, the Town Council did a most praiseworthy act. These men have stopped most of the objectionable scenes on the bathing beach, put an end to the main street night rowdyisms and driven many bad characters back to the mainland. Indeed, their work has been so satisfactory, that some prominent citizens have expressed a desire to see the present number augmented next season, with the erection of a stone jail and headquarters, with telephone connection, and at least one policeman in reserve to respond to any call that may come in to hasten some scene of disorder. This police building should be located closer to the business section than the present lock-up.  It is too far away from the localities where most of the disturbances occur, for the policemen to take offenders through dark thoroughfares.

The question of adequate lighting is a big one. At the same time it is all-important. The greatest aid and abetter to vice and crime, is darkness. Lights are the most powerful reformers.  All kinds of rowdies and evildoers are checked by them more efficiently than by police working in the dark, and jails that darkness is able to protect them from.

There is lots of work for the new Board of Trade which has been talked up all season, when it gets into session later on in September, should it become a fact, as many leading business men now seem determined to make it. The spirit is here to make Block Island all it has a right to expect of its natural attractions. It only seems necessary to organize and utilize it effectively.

Manager E. A. Brown of the Hotel Manisses and cottager, has the plans drawn up for an addition to the rear end of the main hotel building which will provide a larger music room and dance floor. The Manisses has had the most prosperous season.

While August, with its rush of busy people on vacations and crowds of excursionists, is passing out of season, September with its early fall atmospheric beauties is now to be hailed in the distance. Block Island is really most attractive in June and September. The nights then become a little cooler, but the days are much more beautiful. Sailing and fishing are the best in the late spring and early fall. Then the waters are more calm and the sun is not so hot or hard on the eyes.

It is possible to secure better accommodations at the hotels in June and September, and the proprietors and their lieutenants are able to give greater and more individual attention to guests. The Spring House, Hotel Manisses, National, and Eureka, will remain open until late this season. The first two posted announcements, giving September 15 as the probable closing time. The Woonsocket never closes early, and the Eureka is practically open all the year around.

Those who wish to enjoy the delights of September on the Island can find ample accommodations to suit their tastes, whether that lead them to a commodious hotel or modest farm house.