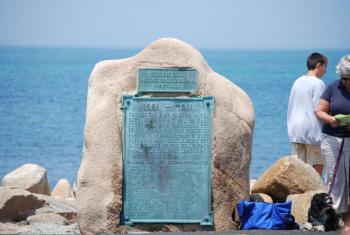 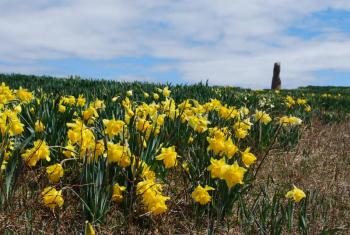 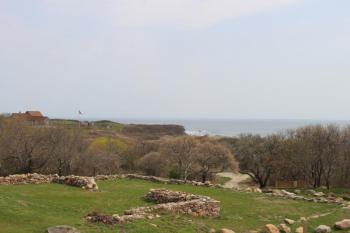 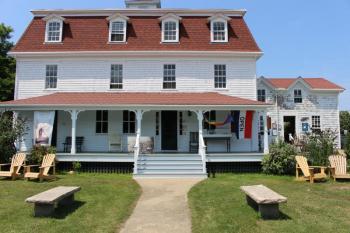 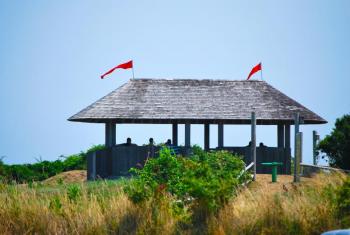 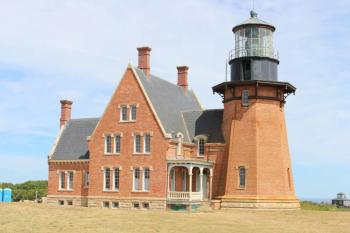 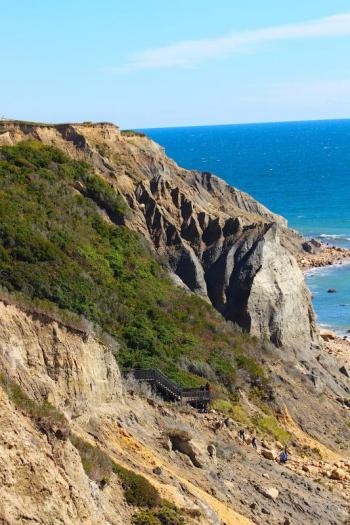 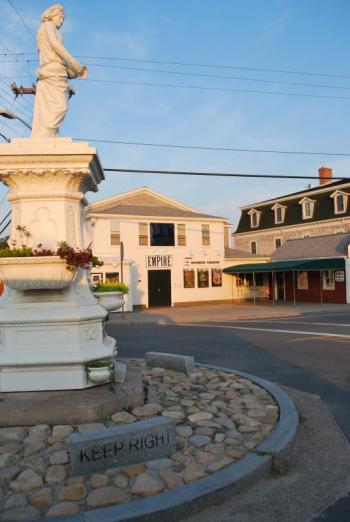 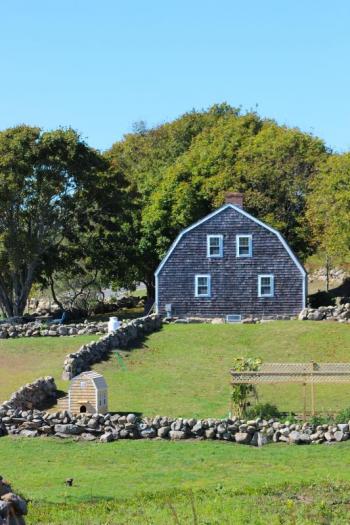 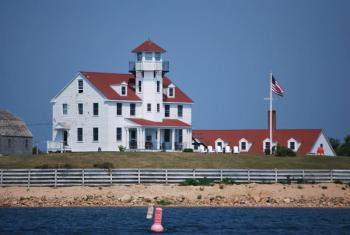 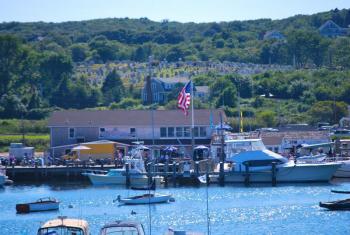 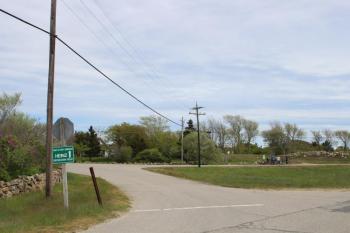 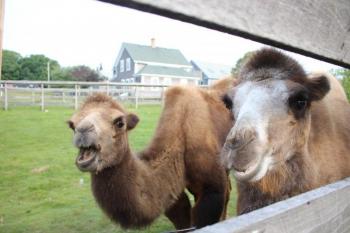 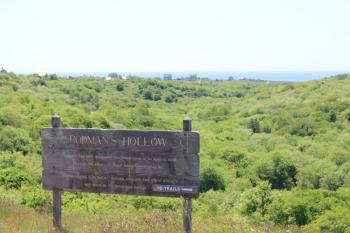 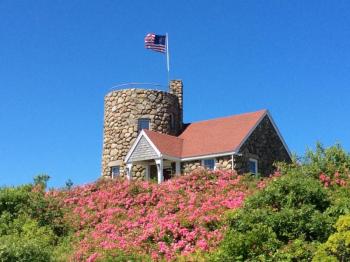 1. THE NORTH LIGHT is the fourth lighthouse built on Sandy Point. The first, finished in 1829, was washed away in a few years. A second light began operation in 1837, but was not visible to ships due to the shifting sands. The government built a third light near the end of the Point in 1857 and that also succumbed to the sea. At last, in 1867, the present sturdy building of Connecticut granite, hauled to the site by oxen, was completed. The North Light now leads a second life as an Interpretive Center with exhibits on loan from the B.I. Historical Society. The lighthouse building will be open from July 5 until Labor Day, daily except Tuesdays and Wednesdays. Self guided tours are available, but it is closed during inclement weather. The lighthouse is located in the B.I National Wildlife Refuge and is less than a half-mile walk from Settlers Rock. Please don’t swim at Sandy Point as there are dangerous currents.

2. SETTLERS’ ROCK AND SACHEM POND are at the northern end of the island. The stone memorial was erected in 1911 in commemoration of the landing 250 years earlier of the first European settlers on Block Island. In 1661, the families and animals of 16 men who had purchased the island for 400 pounds sterling arrived by shallop from the Massachusetts Bay Colony. Because the island had no natural harbor, they were forced to leave their small ship and wade ashore. The cows swam ashore into the cove, known thereafter as Cow Cove. Bird watching, fishing, and sunset gazing are favorite pastimes at this location.

3. CLAY HEAD NATURE TRAIL aka THE MAZE aka BLUESTONE is reached via a dirt road leading off Corn Neck Road across from a yellow Victorian house just two miles north of the Fred Benson Town Beach Pavilion. A paradise for walkers, Clay Head Trail leads to the northeastern shore of the island and meanders along the scenic bluffs of Clay Head for more than a mile until it reaches Settlers’ Rock and Sandy Point. Take care not to get too close to the edge of the bluffs for there is constant erosion, which means a danger of falling. Branching off the trail are other trails, which earned the area the nickname The Maze. One trail leads directly to the beach north of Jerry’s Point where one can still see remnants of the glacial formation called Pots & Kettles.

4. MANSION BEACH is located at the northern section of Crescent Beach on the east side of the island. It takes its name from the Searles Mansion that stood there from 1888 to 1963. The mansion, unused in 1963, was destroyed that year by fire. Only the stone foundation and entrance pillars still remain. On good beach days there is very limited parking space available. Beautiful views and bigger surf are found here compared to the southern end of Crescent Beach. No lifeguards are available in this area.

5. THE B.I. HISTORICAL SOCIETY MUSEUM, GALLERY & GIFT SHOP, at Bridgegate Square across from the bank, was established in 1942. The building, originally known as Woonsocket House, houses an extensive collection of artifacts reflecting the maritime culture of the island. Exhibit rooms include furniture, textiles, boat models, fishing gear, Native American tools and more. This year the exhibit is "Block Island Beginnings" in the new West Gallery. For group tours, genealogy research or to donate anything with Block Island-related history, please contact Executive Director Pam Gasner at (401)466-2481 or e-mail blockislandhistory@gmail.com. The museum is open weekends 11 a.m. to 4 p.m. through June. Old Harbor Walking Tours on Tuesdays at 10 a.m. Family & Guided tours by appointment. Admission: $10 guided tour; Adult $10, $8 seniors and students. Members, free.

6. OLD HARBOR is the year-round docking point for boats coming in from Point Judith, and accommodates seasonal ferries as well as the high-speed ferries. Prior to the breakwater it was known as Pole Harbor as islanders pulled ashore and secured their classic double-ender fishing boats to the poles in the sand. There is limited anchoring space within the breakwaters for pleasure craft and a maximum anchorage of seven days. It is nestled within the bustling downtown, where the majority of the island’s hotels, restaurants, and retail shops are located.

7. OCEAN VIEW PAVILION is a place for rest and reflection. The Ocean View Foundation is a nonprofit that secured this Old Harbor plot for the enjoyment of the public. The site features a finely crafted pavilion and remarkable views. The largest hotel on the island, the Ocean View, once stood on this site until fire destroyed it in the summer of 1966. The pavilion is dedicated to the concept of expanding the public’s awareness of environmental issues. Visitors must walk in from Water Street across from the ferry parking lot just to the left of the post office building. The site is open from dawn to dusk.

8. THE STATUE OF REBECCA formally stands in stark white at the intersection of Water, High, and Spring streets. Named after the biblical Rebekah-at-the-well, the statue originally featured water troughs for horses and dogs and once had running water for human consumption. Installed in 1896 by the Women’s Christian Temperance Union, the statue is dedicated to abstinence from spirits. The much-loved statue was recast and reinstalled to celebrate her 100th anniversary. The conservationists who did the work concluded that the woman is not Rebekah but rather Hebe, cupbearer to the gods.

9. 1661 FARM & GARDENS has a diverse collection of exotic and domestic animals maintained by the owners of the 1661 Inn. The small farm between Spring and High streets is home to camels, llamas, emus, sheep, donkeys, goats, swans, and ducks. Visitors are free to view and pet the animals, which are accessible from Spring Street. Open to the public from dawn to dusk.

10. SOUTHEAST LIGHTHOUSE sits 200 feet above the sea on Mohegan Bluffs. When its powerful light was turned on in 1875, the beams reached 21 miles out to sea, farther than any other light in New England. When the National Historic Landmark was first constructed, a large field separated the house and tower from the cliff’s edge. By the late 1980s, the bluffs had eroded to within 60 feet of the building. Funding was obtained through federal, state and local channels to move it to safe grounds. The move took place in August of 1993 and a large stone now marks where the tower once stood. The grounds are open daily from sunrise to sunset. Guided tower tours are available on weekends in the off season and daily in season. Museum exhibits and gifts are available at the base of the tower. Group tours available by appointment. Info: (401) 466-5009. Please park mopeds, bikes, and cars outside of the fenced area.

11. MOHEGAN BLUFFS, to the west of the Southeast Lighthouse, has a magnificent view of the southern coast and its high cliffs, with Montauk often visible 20 miles away. At Payne Overlook, you’ll find a wooden stairway that was built by the R.I. Department of Environmental Management. It is a difficult climb for the elderly and the unfit, and the footing at the bottom is extremely difficult. This beach can be crowded and swimming is sometimes dangerous.

12. RODMAN’S HOLLOW, named after the island’s first doctor, is a wild and beautiful cleft in the rolling southwestern terrain left from the glacier, and is the haunt of hawks, white-tailed deer, and several rare species of wildflowers. In the 1960s developers bought it and proposed a dozen houses on the slopes. This so dismayed island residents that they formed the Block Island Conservancy, with the late Captain Rob Lewis as their leader, and raised enough money to buy it back so that it could be forever wild. Walking trails lead to Black Rock Beach.

13. ISAAC’S CORNER, at the intersection of Center Road, Lakeside Drive, and Cooneymus Road, is named for Isaac Church, the island’s last surviving native Indian, who died in 1886. Nearby (to the east of the four corners) is an Indian burial ground where the headstones (small fieldstones) are set closely together. Indian custom dictated burial of the dead in an upright position, with a pot of clams or oysters beside them to speed them on their way to the next life. The Town’s Heinz Recreation Playing Field, where summer camp and sporting events are held, is located just north of the corner. Take the first right. Parking available on the grass. There are also Greenway trails accessible across the street that meander around Fresh Pond.

14. SMILIN’ THROUGH is a gambrel-roofed cottage situated on Cooneymus Road, where composer and poet Arthur Penn and his wife Nell resided in the 1920s. Penn’s musical works include a song about the B.I. home, “Smilin’ Through.” The original cottage was built in the 1700s by Trustrum and Dorcus Dodge and was remodeled in 1950. The privately owned house sits on the edge of a sloping hill, which leads down to the waters of Fresh Pond.

15. BEACON HILL, with its stone tower, is visible from almost any part of the island. From a height of 210 feet above sea level, it commands unsurpassed panoramic views. The Indians held tribal councils there, and watches were kept on Beacon Hill during the American Revolution and the War of 1812. The tower was designed as a memorial to the island’s seamen. It is now a private home, so you’ll have to enjoy the site from a distance.

16. THE COAST GUARD STATION opened in 1938 as one of the first Coast Guard stations on the East Coast. The station was one of two on the island, with the second one once standing at the site of the present-day Beachead. Before its reopening in the 1990s, the current station was boarded up by the U.S. Transportation Department that oversaw the Coast Guard before the creation of the U.S. Department of Homeland Security. In the late 1980s the town worked with the federal government to transfer control of the property to the town of New Shoreham. The Coast Guard returned and initiated regular summer patrols of the harbors. The local police, who lack their own boat, appreciate the help on the seas.

17. NEW HARBOR is the first stop for those coming in on the Montauk ferry and is the docking and anchoring spot for most private boaters. New Harbor was, in fact, the site of the island’s first protected harbor, but the expense of keeping a breachway open between the Great Salt Pond and Block Island Sound caused it to be abandoned in 1705. A new breach was cut and a breakwater was constructed to establish a permanent access point in 1897. Docks, marinas and anchoring sites await boaters in the southwest corner of New Harbor, as well as shops, restaurants and hotel accommodations. Pumpout services are provided by the town harbormaster, as discharge in the pristine waters of the Great Salt Pond is prohibited.