View from Behind the Table 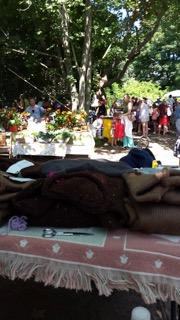 For vendors, the Farmer's Market begins long before the 9 a.m. bell rings. Up with the sun, we have to pack our cars full of goods and head down to the market an hour ahead of time, even if we were up late the night before finishing last touches.
Once there, cars back carefully into the vendors designated posts to unload wares. For the four years I've been in attendance, this has been at shady Negus Park, behind the fire barn, but this year Saturdays at the market will be spent at Legion Park, the triangle of grass between Center Road, West Side Road, and Legion Way near the marinas of New Harbor. Tables spread out in concentric circles, making a two-sided lane for visitors to walk between. From behind my mother's table, Block Island Sweaters, Etc., I've spent many Saturday mornings watching island visitors stroll among the more than 50 tables sporting goods as diverse as photography and cleaning supplies, baked goods and home-grown flowers, jewelry and pickled vegetables. It's a true artisan's forum, packed with some of the most unique souvenirs one can expect to bring home and some of the best breakfasts to be had.
Customers begin lining up before 9 a.m. for scones and other baked goods, but they'll have to wait until the bell rings before any purchases can be made. It's slow in the first hours, and terribly exciting when someone stops long enough to look at the table rather than sliding their eyes over it from the baker on our left to the jeweler on our right.
And then, the ever-anticipated approach. A woman steps away from her husband and children and leans over the table. I eye her coffee carefully, held perhaps a little too closely to an off-white sweater, but remain silent as she runs her hand down the thickly knit front of a child's sweater. "These are beautiful," she says, finally making eye contact.
The early hours of the market are filled with an ever increasing flow of people, backed by the sound of the ukulele player sitting at the base of the trees. For vendors this is a time to socialize as well, ducking behind each others' booths to say hello.
At last, 11 a.m., the final half hour rush where late sleepers have finally arrived and satisfied shoppers decide to depart after their hour-long stroll around the tables. Both are eager to leave with something special and uniquely Block Island. This is the time that a mediocre sales day could turn into a great one.
Vendors, their eyes on their clocks, make change on last minute sales, pack up remains to be sold, and disassemble their tables. At 11:30 a.m. it's time to finish up, and by noon the park looks as empty as if the market had never been there. At least, until next week.