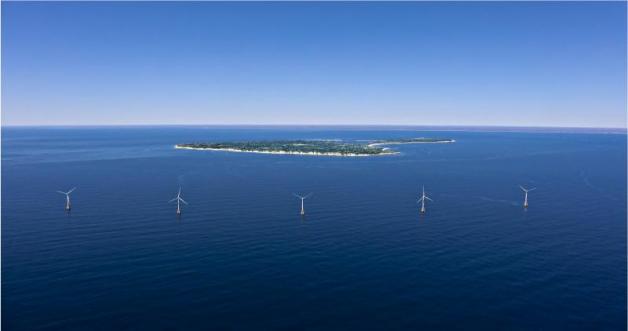 When the blades of the Block Island Wind Farm’s five turbines were spinning at about 5:30 a.m. on Monday, May 1, Block Island became the first community in the United States powered by an offshore wind farm. That is when the Block Island Power Company first took receipt of wind-generated energy from the 30-megawatt wind farm to power the island.

Eleven years ago that may have seemed like a farfetched idea. In 2006, then-former Rhode Island Gov. Donald Carcieri put a plan in place to supply the state with renewable energy sources and develop large-scale offshore wind projects in the region. Now that plan is a reality with the Block Island Wind Farm up and running, doing what it was intended to do: liberate Block Island from its dependency on diesel generated power.

On that May 1 afternoon, with the foghorn sounding, BIPCo hosted an event at the Southeast Lighthouse bluffs to celebrate the historic switch over from the utility’s diesel burning generators to clean, wind-generated energy. Unfortunately, as New Shoreham First Warden Ken Lacoste said, “It’s typical Block Island — nature is having its way;” the intended backdrop of the wind farm’s five turbines was obscured from view by dense fog.

The fog combined with unusually light wind conditions did not put a damper on the celebration. The crowd that gathered on the bluffs commended state and local officials, as well as the project’s developers, Deepwater Wind, and National Grid, for their efforts in bringing the wind farm to fruition.

“The weather is unfortunate, but welcome to Block Island,” said BIPCO Interim President Jeffery Wright, who hosted the event. “It’s a very good day for us. Congratulations Block Island.”

“I can assure you, there are five wind turbines out there,” said Deepwater Wind CEO Jeff Grybowski, referencing in the direction of the five turbines located three miles from shore. “This is an incredibly special moment for us. It’s a historic day. It’s one I’m very proud of.” Grybowski said he learned “patience and persistence, and being able to have the mindset to weather the ups and downs,” while constructing the $300 million wind farm.

“We’ve crossed a milestone,” said Lacoste, who noted the “significance of the moment, earlier this morning,” when “violent detonations of diesel fuel were replaced by graceful revolutions of sleek turbine blades as a symbol of Block Island’s main source of alternate energy.”

“It’s been a long time coming,” said Second Warden Norris Pike. “This is the reward of public life — to slog through a challenging process like this, and have the reward that it happened. It’s fantastic.”

“We did it,” said former First Warden Kim Gaffett. “I am thrilled. I think it’s great for Block Island.” During the event, Gaffett urged Wright to give credit to Deepwater Wind Project Manager Bryan Wilson, who serves as the island’s liaison for the project. Wilson stepped forward and received a round of applause, and words of praise from officials.

“This is a pretty exciting day. I want to jump up and down,” said State Sen. Susan Sosnowski. “I’m super excited that it is finally happening. The wind farm is giving Block Island energy independence.”

State Rep. Blake Filippi said that although it was a “momentous occasion,” it was also “a wonderful opportunity” for the economy of Block Island. Filippi feels that the maintenance of the wind farm can be an educational and training tool and provide jobs on the island.

Brian Gemmell, Vice President, Strategy and Performance, National Grid FERC Jurisdiction, said that the utility company was “thrilled to be a part of this important project.” Gemmell called it an “incredible achievement,” and said that, “National Grid wants to see more renewable energy come onto the grid.” National Grid owns the $125 million cable transmission system associated with the wind farm.

Wright said that since the BIPCo employees have held the longstanding tradition of keeping “the light on since 1925” it was emotional shutting down the generators at the plant. Wright said Night Watchman James Milner got teary-eyed when he took the final set of readings at the plant on Sunday night. “I think he realized that an era had come to an end.”

“It hit home this morning at BIPCo when the guys shut the engines off,” said Wright, who noted that when the loud diesel burning engines were shut off the BIPCo staff could hear the birds chirping.