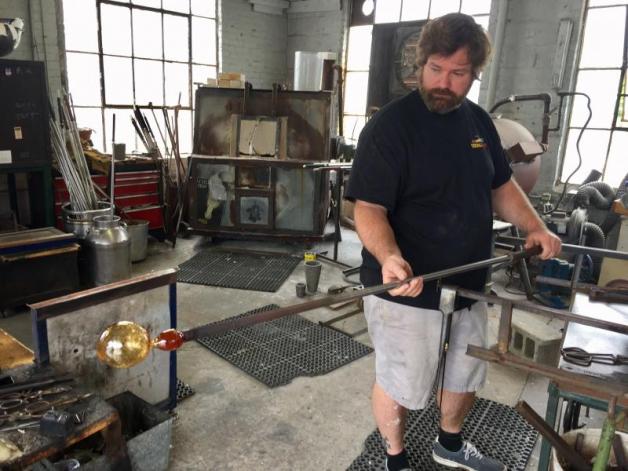 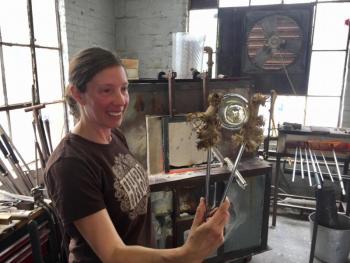 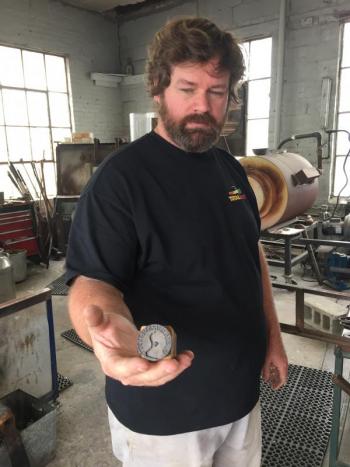 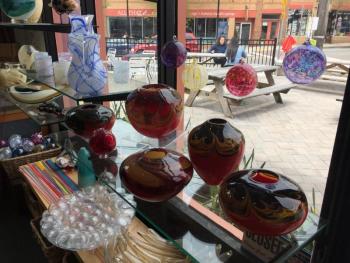 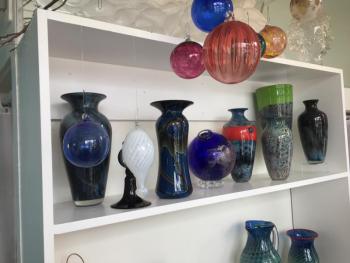 “It’s such a beautiful place — unspoiled — and this project captures that.”
That’s what glass blowing artisan Eben Horton said about Block Island and its relationship to his Glass Float Project. The project involves Horton’s production of hundreds of glass floats, or sphere-shaped ornaments, annually at his Wakefield shop, The Glass Station Studio and Gallery. For each of the past six years, he has hidden them in different locations on the island.
The floats, similar to the glass net floats used by Japanese fishermen, are randomly hidden by Horton and some helpers along Block Island’s shoreline, and the many miles of the Greenway Trails that are maintained by The Nature Conservancy. Horton says the only rule of the project is one float per person. If you find another float during your search, leave it for someone else to discover.
Horton calls his endeavor an “interactive public art project,” that was born out of both necessity, and creativity. “Around 2009, to 2010, business was slow,” he said. “So, I was trying to be creative about what I was doing with my time at the shop.” That’s when the idea for the “Glass Float Project” was hatched. “It’s kind of now become a tradition out there.”
“I didn’t want to do anything too serious,” said Horton. “I think this is a fun project that keeps me outdoors, and takes me to Block Island.” Horton said he and his glass-blowing partner, Jennifer Nauck have made it their routine to journey to the island the first weekend of June every year to hide the floats.
“I couldn’t do it without Jennifer,” he said, noting that he enlists helpers to hide the floats. “It’s a lot of work. So we make an afternoon jaunt out of it. The first stop is the Block Island Grocery Store to get food for a picnic. Sometimes we even spend the night on the island.”
“Eben knows every inch of that island,” said Nauck, noting that Rodman’s Hollow is her favorite spot to visit. Of the placement of the floats, she said, “You develop an eye for finding the right hiding places.”
“There are professional float finders on Block Island,” said Horton, “and some people who get frustrated when they don’t find any floats.” One such person, he said, was an 8-year-old girl, who wrote Horton a letter in crayon expressing her frustration with the project.
Horton began blowing glass at the age of 15 when he found work at Thames Glass in Newport. He refined his craft by attending The School of American Crafts BFA program at the Rochester Institute of Technology, and taught glass blowing at The Corning Museum. He founded The Glass Station in 2000, where he creates glass for sale at the store’s gallery, and floats for the Glass Float Project.
While working with a 2,000-degree furnace, Horton said it’s important that attention is maintained to create his glass works of art. “Glass blowing requires hyper focus. You need to get dialed in,” he said. After creating a float, Horton stamps it and then places it in an annealer, a slow-cooler, where “it remains all day at a 900 degree temperature, and then cools to room temperature over a 12-hour period.”
For the 2017 summer season, Horton is hoping to generate $9,000 through a Go Fund Me page, so that he can create 550 glass floats, 17 of which will be colored, for the project. When he was interviewed for this story Horton said he had raised $3,700, and that he will only make as many floats as his funding permits.
Horton said if a person donates $50 or more to the project they are invited to a private Facebook group page where they are provided with photos and clues about where the floats have been hidden on the island. Donations to the project can be made at: gofundme.com/Glassfloatproject
Locations where floats have been placed on the island include inside the American Legion cannon, amidst a cluster of dock pilings, along hiking trails, under logs, in trees, etc. “My favorite hiding place was the cannon,” said Horton, describing the challenge of carefully placing the float inside. “I love to hide floats in places like that. Making them is a craft, but hiding them is a lot of fun.”
Horton marvels at the fact that he sees floats that have never been found during island visits. “There are times when I can’t believe they still haven’t found this one, or that one. And there are times when I know no one is going to find others,” he said.
Although he has created hundreds of floats, and visited Block Island numerous times, Horton said he has never witnessed someone finding a float. “We call it a live capture,” quipped Nauck.
“I heard someone screaming on Clay Head once,” said Horton, “Serious screams, that turned to recognizable screams of joy. It was someone who had found a float.”
As for the chances of finding a float on Block Island, Horton said, “I think it’s all luck. Being in the right place at the right time.”
Horton said that people can learn more about the project by visiting: glassfloatproject.com.