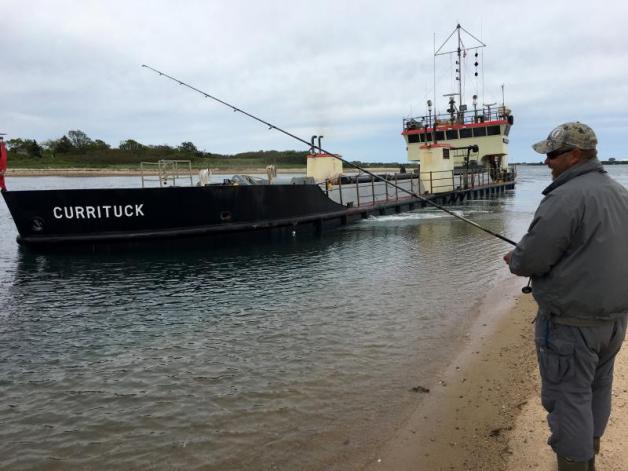 Block Island fishing expert Hank Hewitt tending his line beside the Currituck, which he calls a “fisherman’s friend,” at the Coast Guard channel. Photos by Cassius Shuman 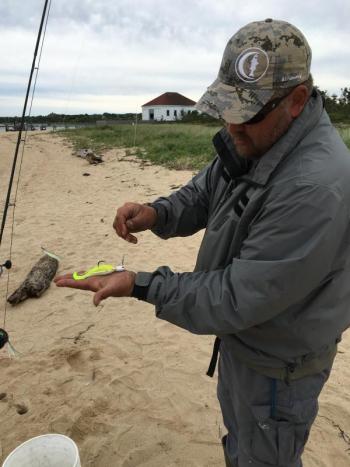 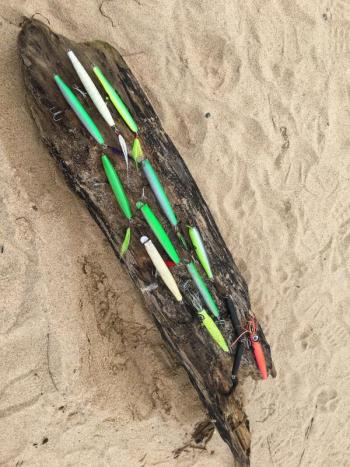 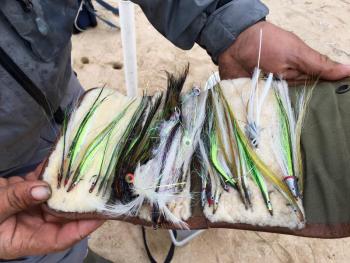 "Be confident in what you’re fishing with. You have to think like you’re the bait, and be dialed in to catch fish."
That is the gospel of Hank Hewitt, a Block Island fishing aficionado who is more interested in helping fellow anglers and “paying it forward” than catching the biggest fish in the sea. Hewitt said that since Block Island is located some 13 miles out to sea it is an estuarine environment that is home to an assortment of species.
“All fish are trophies,” he said, while standing at the edge of the Coast Guard channel with his line in the water. “They’re an incredibly valuable resource.” A few moments later, he snagged a fluke that he quickly reeled in, freed from the hook and then tossed back into the water.
Hewitt said he gives back to the sport that he loves by volunteering his expertise to anglers who he feels might be in need of assistance. It’s not uncommon that he will gift someone one of the fancy handmade lures that he creates from scratch. “I’ll give some people instruction if they’re having trouble when they’re fishing,” he said. “It’s not uncommon for me to give half of my fly-box away.”
Hewitt, who works at Block Island Fishworks, passes most of his time on the island with his trusty dog, aptly named Angler, at his side, and fishing rod in-hand while toting an assortment of custom made lures that he casts from either the deck of his boat, the FV Harley, or the sandy shoreline. His motto in life is a variation on the biblical phrase Luke 12:48: “To whom much is given, much is expected.”
In that vein, Hewitt often fishes with novices, including the young anglers who live on the island, teaching them about the craft of the sport. “Teaching them fishing is teaching them a skill,” he said. “I make the lures that the kids use. If they catch a fish they get to keep the lure.”
“Fisher Johnston caught his first striper (bass) using one of my needlefish lures two nights ago,” said Hewitt. Johnston is a sixth grader at the Block Island School. “Fishing is a positive learning experience for the kids. I tell them to help other kids who are fishing, and pay it forward.”
Hewitt said he recently fished with Andrew McGarry, a sophomore at the high school, at the Coast Guard channel. McGarry snagged a “sand eel that the Currituck kicked up from the bottom of the channel.” Hewitt suggested that the young angler utilize the sand eel for bait. “He caught fish after fish after that,” said Hewitt, who noted that, “the bass were biting.”
Hewitt admitted that the Coast Guard channel is one of his favorite spots to fish on Block Island. The Summer Times joined Hewitt on an excursion to the channel to learn about casting technique, essential gear and the subtleties of fishing, but discovered that there's much more to the sport than bait and hooks.
As Hewitt noted, fishing is about psychology, possessing the suitable mindset to confidently sink your chosen jig, or lure, into the water and land a prized keeper. Hewitt acknowledged that when you’re fishing you have to do so disguised as bait; guiding the lure to feign distress, swimming amidst the current and then in the blink of an eye, snatch an unsuspecting predator from the murky depths.
“This is hunting,” remarked Hewitt, “and the channel is the best place to come when fishing with a light tackle.” Hewitt said that different settings, and targeted species require different types of equipment.
Part of that equipment is the custom handmade lures that he makes from wood and lead. The lead gives the lure weight to sink in the water. Each lure requires about 45 minutes to craft from scratch, while the eye-catching colorful paint he adds takes “about 24 hours to cure.”
Hewitt said he uses “Gulp,” which is a synthetic, biodegradable plastic product that sits in a fishy solution to attract what he’s targeting. “This stuff is amazing,” he said, while using fishing vernacular to explain how it works. “I take the Gulp and hook it into a jig, and hop it underground. We hop it to get them to hit.”
The translation: Hewitt gently bounces, or dances, the lure near the bottom of the channel when fishing for fluke since they’re bottom feeders. “It’s a bottom bouncing technique,” he said.
While Hewitt was describing his technique, the Army Corps of Engineers’ dredging vessel called the Currituck appeared near where he was fishing. “Not a lot of people realize that the dredge is a fisherman’s friend,” he said. “The first time I was skeptical about it, but then I saw fish jumping in its wake, and I realized that something good was happening.”
Hewitt said that when the dredge operates in the channel it unearths bait from the bottom creating a “chum pot. I use it as a tool,” he said. “The bait becomes an easy meal for predatory fish.”
This became apparent to The Times’ reporter, who, after some instruction, cast a line into the water and instantly snared a feisty 14-inch fluke. Some might say it was a lucky strike, but the reporter thinks that the outcome was more likely attributable to Hewitt’s instruction when it’s put into practice.
Other places that Hewitt likes to fish are the north rip, near the North Lighthouse, at Scotch Beach on a closeout break, and out near the Block Island Wind Farm turbines. “I fish a lot. I mean a real lot,” he said, noting that he sometimes fishes 15-hour days.
Hewitt said that one of the most important things to remember is to always fish with decorum. “I understand the desire to catch fish, but you shouldn’t do it at somebody’s else’s expense,” he said. “We should all fish like we’re a team. We’re fishing in one of the most beautiful places in the world.”