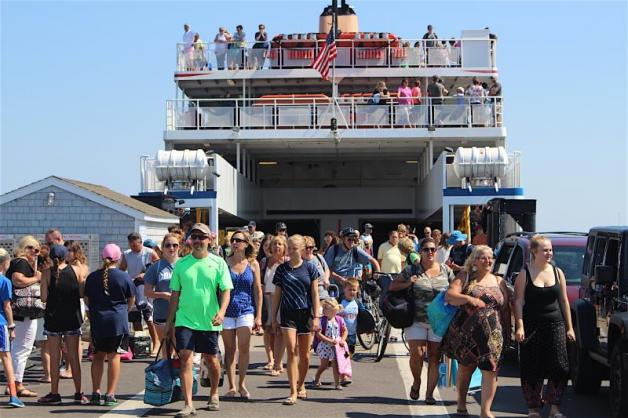 The ferry unloading upon arrival to Block Island. Photo by K. Curtis 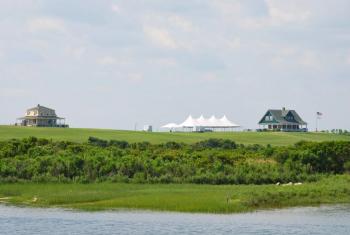 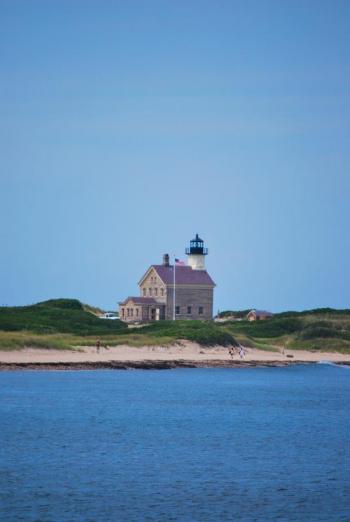 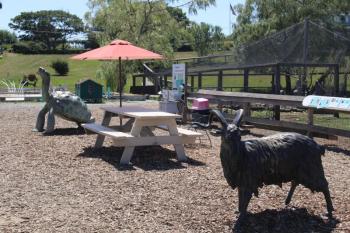 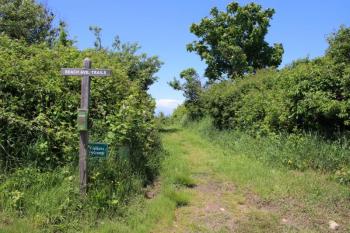 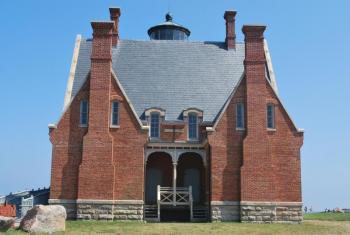 The ocean glistens as the sun’s rays cast a warm light on the placid surf beyond the breakwater as the Block Island Ferry cruises into Old Harbor. The large white vessel backs into its slip, unloading a stream of vehicles followed by a parade of visitors, who cart bags, bicycles and belongings as they descend on “the last great place.”
Wearing shorts, sandals and sunglasses, some of them hop into vehicles, or taxis, while others enter the Welcome Center and check in with the Block Island Chamber of Commerce to get their bearings. Some march straight up to Water Street to grab a burger at Rebecca’s, or stroll, visiting the assorted shops and restaurants along the way. Some take an immediate left turn after departing the ferry, and journey to Ballard’s at the beach.
Block Island may only be a three by seven mile island, but it offers a variety of enjoyments, everything from kayaking and sailing on the Great Salt Pond, to fishing at the Coast Guard Channel or out on the high seas by the foundations of the Block Island Wind Farm. There is also the search and discovery of Eben Horton’s glass floats, for some lucky souls, during a leisurely trek through the Greenway Trails, Clayhead Trails, or Rodman’s Hollow, to name a few.
For others, their journey leads them down Water Street to the new wooden stairway in front of the National Hotel, right near the Surf Hotel, where they descend and are deposited on the sandy shoreline. From there they can either join their boating enthusiast friends in the harbor’s inner basin, or find a patch of sand on Crescent Beach to enjoy some sunbathing and a dip in the ocean.
Another alternative is walking down Water Street, around the notable bend where it turns into Dodge Street, past the Island Free Library, some shops and inns, to Bridge Gate Square. Heading straight through the intersection onto Ocean Avenue leads past the Block Island Grocery store, and restaurants, toward New Harbor and the Great Salt Pond. Turning right directs them onto Corn Neck Road and some eateries, or the wind-swept dunes equipped with walkways to the beach.
A sightseeing adventure down Corn Neck Road delights with a view of the Sullivan House and its wedding tent perched on a hill, or to the Fred Benson Beach Pavilion and a day at the beach. Venturing down “the Neck,” as it’s called by the locals, leads past Scotch and Mansion Beaches and a variety of rights-of-way, including Andy’s Way, the Hodge Family Preserve, until the trip ends at Settler’s Rock, Sachem Pond and the North Lighthouse.
Of course, before getting that far down Corn Neck Road, a left turn onto Beach Avenue takes them over a small bridge with a pictorial view of the pond. After glimpsing boaters and paddlers cruising under the bridge, a jaunt up the road and a  right turn at the Police Station onto Ocean Avenue, brings them over another bridge and then straight to Payne’s Dock.
Or, the adventure can include a left turn onto West Side Road, and a right, to arrive at the Block Island Boat Basin, where a breathtaking view of the sun setting can be enjoyed from The Oar, or the deck of a boat. West Side Road also provides for a cruise through a rustic environs to Grace’s Cove, Dorry’s Cove, and a collection of beaches on the west side of the island.
Turning left at Bridge Gate Square, they would find the sandwich shop called Three Sisters, or travel past on Old Town Road and find the New Shoreham Town Hall. Keep going and the journey leads through a rural landscape to Club Soda, on Connecticut Avenue, or, further down the road, a left turn onto Center Road, and up the hill, to the Block Island Airport.
One option after embarking from the ferry is taking a left on Water Street and traveling onto Spring Street, past the Spring Street Gallery, Hotel Manisses, the 1661, and the Abram’s Farm, as well as The Spring House, or continuing up the hilly road to the Southeast Lighthouse. The red brick lighthouse on the bluffs offers a scenic, panorama view of the Atlantic Ocean and the Block Island Wind Farm. Past the lighthouse, down the road a short distance, is the Mohegan Bluffs stairway, a steep 100-foot descent to the beach.
An enjoyable trip could entail continuing along Mohegan Trail, and arriving at the landmark known as Painted Rock, which is a rock painted over and over again in the spirit of the theme of the day. For instance, the July 4th holiday saw the rock painted red, white and blue, or decorated to resemble a colorful, giant egg to celebrate Easter Sunday.
There is also the trip up High Street, by a general store, The Nature Conservancy, the Atlantic Inn and some other inns and residences, to the Block Island School and the Block Island Medical Center. High Street is the first right after The Empire Theatre off of Water Street.
Picturesque scenery, breathtaking views, and 17 miles of sandy shoreline. There are a myriad of experiences and activities that Block Island has to offer a restless explorer seeking adventure on a remote, alluring, idyllic island. It’s all just 13 miles from the mainland and a boat ride away, where memories are made.