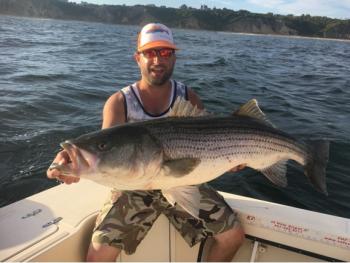 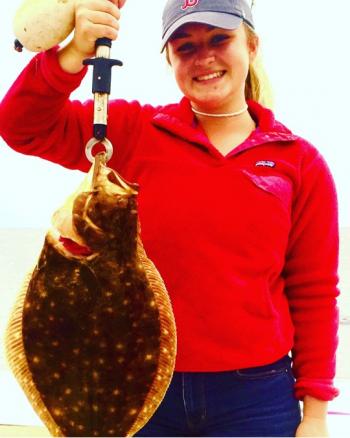 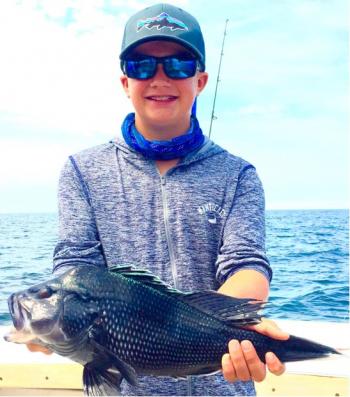 June can be a wonderful month for those plying the Block Island waters for finned quarry. Whether you are an ardent seasoned surf caster, adept fly fisher, salty boat angler, or simply a beginner angler, there are a multitude of shoreline spots, and fantastic fishing grounds surrounding the island. Here's a brief overview of what types of fish are present, where they're most likely caught, and where they eat.
Perhaps the most popular species of fish pursued, and what has made Block Island famous in saltwater angling communities, is the iconic striped bass. Small striped bass show up in early to mid-May, and the large "cow" stripers show up around the new moon of June. Stripers can be caught everywhere around Block Island. Shore based anglers have most success under the cover of darkness. They come into the docks and marinas at night to feed on squid and will cruise the surf zone looking to eat any fish they may fit in their mouths. Boat fishermen can find Stripers among the many reefs and boulder fields around the Island. The most common forage fish for the Striper around the Island is the sand eel. They travel in masses, often in the thousands, all around the island and the Great Salt Pond. Striped bass do taste great; however, we recommend only harvesting stripers from 28"-34". Due to the massive fishing pressure placed on this species, spawning habitat degradation, and the fact that very large stripers carry unsafe levels of heavy metals, we strongly recommend releasing stripers over 40" for the good of the species and your health.
The next most popular sport fish we see are tackle busting, sharp toothed, bluefish. Often referred to as "yellow eyed demons", bluefish build in in numbers around the island in June. These are voracious, hard fighting, and potentially dangerous fish. Their mouths are lined with sharp serrated teeth and have incredibly powerful jaws. Great care must be taken unhooking these fish. Bluefish will come into the docks and marinas to feed on squid and are often mixed with striped bass. Bluefish get mixed reviews as food fish.  But, when properly cared for and in sizes ranging from 18"-30", they grill nicely, sautée well, and make a beautiful pate when smoked.
Next on the fish species list is the summer flounder, also known as Fluke. These are flat fish and look like halibut. They are extremely aggressive and lay on the bottom waiting to jump on hapless baitfish or squid swimming to close to the bottom. From shore they are most often caught in the Coast Guard channel entering the Great Salt Pond. From the boat they're found in a variety of depths, and like flat bottom especially around the edges of rocks which enhance their ambush feeding. These are one of the most delicious fish one may catch and are often on the menu at Island restaurants.
Our next species is readily caught from the boat all around the Island is the Black Sea Bass, aka BSB. The season opens June 24th but are often caught much earlier than that. These fish have seemingly bottomless pits when it comes to feeding, and are highly territorial, so merely invading their space will get a strike. They're a spikey finned fish and arguably one of the tastiest.  Their white meat is as easy to prepare as fluke. It does well baked, sautéed, or fried and is best served family style – the whole fish on a plate.
Rounding out the species list is the scup, often called a porgy. They are great fun for children and easily caught all day with simple rigging. Then Coast Guard Channel is a great spot from shore once these fish move in.  A big porgy is 18" or more. They taste very good but have a second bone structure that needs to be trimmed away. By far it is the most underrated as a food fish but is quickly gaining popularity due to their taste, numbers, and ease of catching.
Last on our list of fish to catch, isn't a fish, but a mollusk, and that's squid. Squid fill the great salt pond in May and are aggressively feeding by June. This is the easiest fishing as they swarm around the lights at the marinas. A small rod and reel, even hand lines, with an appropriate styled squid jig will catch everyone some squid. Squid not only make fantastic bait, but they are true calamari and are fantastic when freshly prepared. Worth the effort of catching and cleaning every time.
So this gives an idea of our most readily caught fish species. For detailed technique on catching these various fish species, stop in and see us at Block Island Fishworks.